Donald Trump is “greatest con artist in the history of the world” and “has spent his entire life as one of the most successful criminals in America,” best-selling author David Cay Johnston says.
Johnston, a former reporter for the New York Times, says 1977 was the last year that Trump paid any income tax and the self-proclaimed billionaire is unlikely to cough up any income taxes anytime soon.
“By my calculations, Donald Trump will probably live tax free until he is 96 years old in the year 2042,”Johnston told students during an appearance today at Flagler College in St. Augustine, Florida. “Every dollar he doesn’t pay is a dollar shifted onto you and everybody else.”
Johnston, regarded as one of the nation’s top investigative journalists, was awarded the Pulitzer Prize in 2001. He is the author of “The Making of Donald Trump,” the best-selling biography of the president.
“It’s in 11 languages so far with more coming,” Johnston said.

The book describes Trump’s unflagging loyalty to such characters as Joseph Weichselbaum, a convicted felon and cocaine trafficker who has been described in law enforcement reports as a Mafia associate.
Trump has “deep and inexplicable involvement with one of the biggest cocaine traffickers in America for whom he risked everything he had just to demonstrate to that cocaine trafficker…that he is loyal.”
Trump has shown similar loyalty to Russian President Vladimir Putin, Johnston said.
“And you should ask yourself why the president of the United States should speak admirably and express his fealty to an autocratic and murderous dictator in Russia or to one of the biggest cocaine and marijuana traffickers in America.”
At best, Johnston said, Trump has “massive connections” to Russian oligarchs who are “state-sponsored criminals.” At worst, the author said, “I’m worried about whether we have a traitor in the White House.”
“There is so much smoke here,” Johnston said. Failing to investigating Trump’s ties to the Russians “would be a mistake.”
The journalist fears for America’s democracy and worries that Trump will lead the United States into a catastrophic war.
“Trust me, if the generals let him do it, Donald Trump’s going to use a nuclear weapon. He’s just looking for an excuse.
“You are in very serious danger.” 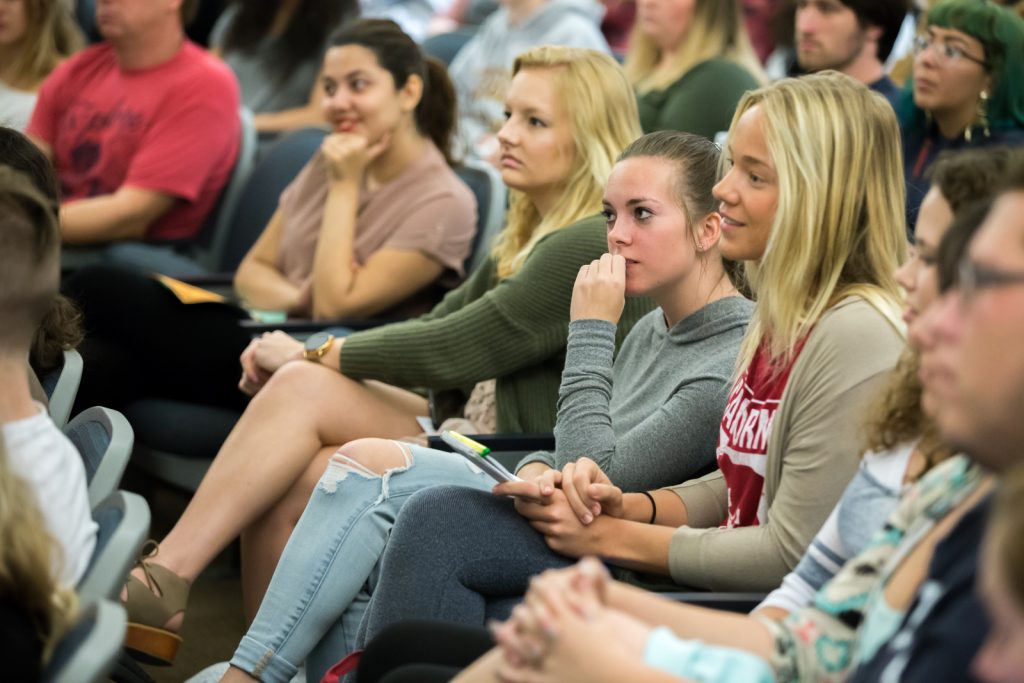 One student asked Johnston if he belonged to a political party. He replied that he’s a longtime Republican.
Asked why he has taken such an interest in investigating Trump, Johnston said,
“It needs to be done. My country needs to know these things. That’s why I do it.”
Johnston, who lives in Rochester, N.Y., says he has the world’s largest private collection of documents related to Trump. It includes tens of thousands of pages of court papers and other documents.
He is writing a second book about Trump for Simon & Schuster, and it is expected to be out by the year’s end.
Asked about his relationship with Trump, Johnston said, “I’ve met with Donald many times. During the campaign, the only contact I had from Donald was when he called me at my home April 27th of last year to tell me, ‘If I don’t like the way you write it, I’ll sue you.'”
Johnston says Trump was only trying to intimidate him. But he said, “I don’t intimidate.”
He says Trump’s phone call “was the first sign to me that he was sort of out of control,” and he expects the president’s behavior to become even more erratic. 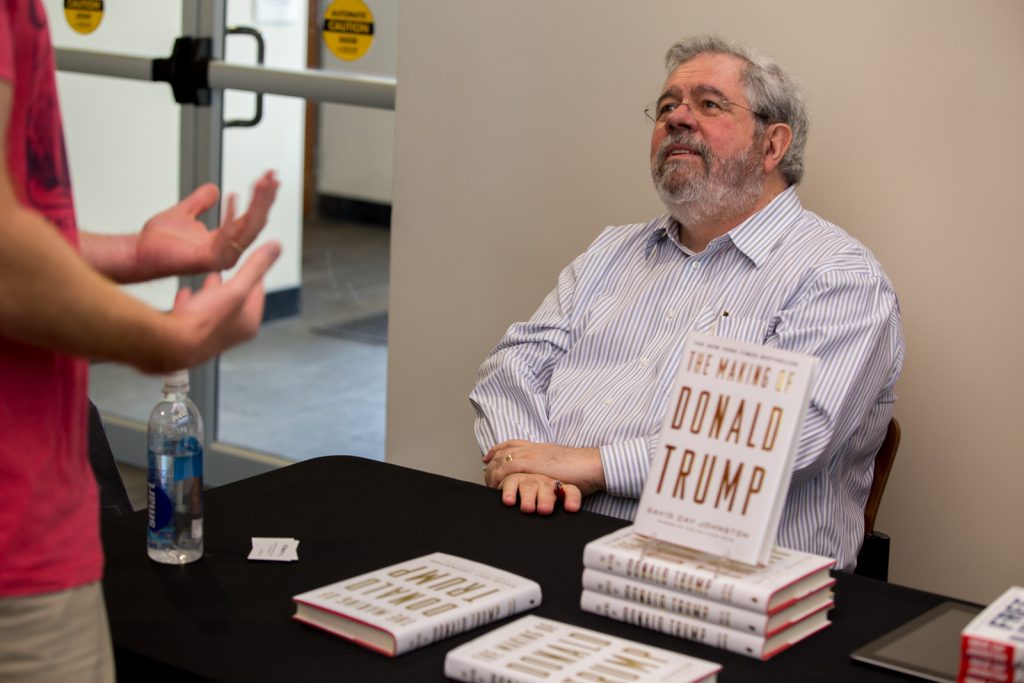 He said he would like to interview Trump again, but doubts it will happen.
“I’m going to ask the White House for an interview, but I’ll be surprised if Donald ever talks to me. I don’t think Donald Trump has the courage to sit down with me for a no-holds-barred interview.
“Donald Trump only likes news reports he controls. In my book, I tell about how he has created fake p.r. people in the past that were him. And he has planted news stories about imaginary lovers. Women who were pounding on his bedroom door – two of them he never met and the other called him a lunatic.
“You have to understand that Donald, who at times is literally delusional, he just makes stuff up.”
With Trump at the helm, America is “in real trouble,” Johnston said.
“If the right circumstances arise, I expect that Donald Trump will try to effectively suspend the constitution and declare himself dictator. All he has to do is get the military to go along with it.” 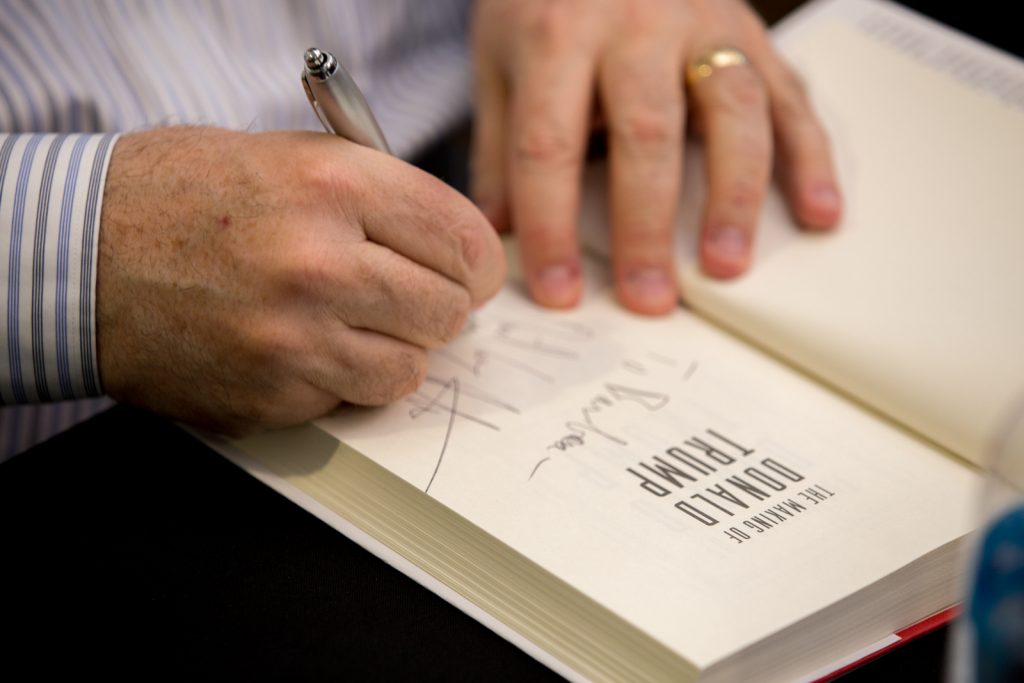