I produced this piece for NBC News. (See original version).

HAVANA, Cuba – Julio Oñate grew up listening to rapper Eminem. He recorded his own songs and dreamed of hitting it big. But success never came and he soon ran out of patience.

“I’m leaving Cuba,” he told his mother. “I’m going to the United States.”

Mirta Mesa was devastated, but said she supported her son.

Oñate, 28, departed in September as part of the largest wave of Cuban migrants since the 1990s. Now, like countless other Cubans, he and his relatives on the island will be apart at the start of a new year.

“If I think about my mother a lot, I get depressed,” he said. “So I work and try not to think about it.”

Once in the U.S., he settled in with his girlfriend in Miami, started working a construction job and bought a green SUV.

“It’s an old car, but it’s very good,” Oñate said. “I think I’ll have it paid off by the end of January. I lived my whole life in Cuba and never dreamed I’d have a car. In three months, my life has changed completely. It’s incredible how your life can change in a moment.”

Cuban officials say migration spiked because many Cubans feared that the Cuban Adjustment Act of 1966 was going to be repealed. Under the act, Cuban migrants need only touch U.S. soil to be eligible for residency. Only Cubans enjoy such a privilege. All other migrants must first obtain U.S. visas, a process that can take from a few months to as many as 23 years, according to the State Department.

Cuban officials say the law, a relic of the Cold War, should be scraped because it encourages migrants to risk their lives to reach America.

Joandri Crespo, 39, of Havana, knows about the risks. He and three friends arrived in November after a perilous journey from Ecuador.

The trip through Colombia was especially frightening, he said.

“I worried they would kill us and sell our organs. That was my fear. I figured one of my kidneys was worth $10,000.”

And so if he had to pay hundreds of dollars to the smugglers, he’d pay it.

Smugglers saw the migrants as merchandise and nothing more, Crespo said.

“It was a business. Everyone had pistols. I’ll never forget those people. They smelled like alcohol and had missing teeth. They were bandits.”

He said the police weren’t much better and extorted money from him and others during their journey.

Crespo said when migrants protested, the police told them, “Don’t complain or we’ll deport you.”

He said he hid his money in his backpack, his shoes, his pants, even his underwear, but the police usually found it.

Some women tucked their money in strips of cotton in their underwear. They smeared blood from a pricked finger on the cotton to discourage inspection. That often worked, Crespo said.

By the time he got through Colombia, he said he missed the tranquility of Havana.

“In Colombia, I saw a lot of violence. In Ecuador, too. I heard gunshots. Pow! Pow! I saw that they were from street gangs. I have to recognize that Cuba has that under control.”

Crespo said he traveled by canoe from the coast of Colombia to Panama. Nearly 20 migrants crammed into each canoe, powered by outboard motor.

At least 16 or 17 of the long, narrow vessels left for Panama every day. Two days before he made the trip, he said a toddler slipped from his mother’s hands and fell into the sea. The canoe’s driver circled back to search for the child, but couldn’t find him. The mother made it to Panama, but was overwhelmed with guilt.

“She hung herself the first chance she had,” Crespo said.

Crespo ran out of money in Panama. He and his friends scavenged the garbage for food and sold the few belongings they had.

“We went through a tremendous ordeal. I wouldn’t wish it on my worst enemy.”

Crespo’s mother, Francis, sent him money so that he could continue his journey north. On Nov. 14, he reached Brownsville, Texas. The next day, Crespo caught a flight to Nebraska, where his mother works at a meat packing plant.

“I was so happy when my son arrived,” she said.

Crespo had lost 20 pounds, but was finally safe. He said he was lucky to make it through Central America before Nicaragua, Belize and Guatemala stopped granting safe passage to Cuban migrants.

Thousands of Cuban migrants were stranded in Costa Rica. On Monday, Costa Rican Foreign Ministry announced that they would be shuttled to El Salvador by plane, then taken to Mexico by bus, ensuring that they will reach the U.S.

Jesús Arboleya, a former Cuban diplomat, said it should be of no surprise that young people have been leaving Cuba. The nation produces more human capital than the labor market can absorb, making the country a “factory” of potential migrants, he said.

Increased economic development is probably the only thing that will deter migrants in the future, said Arboleya, author of a book about Cuban migration.

Many arriving Cubans post photos on Facebook showing scenes from their new American life: Visiting Walmart, driving a car, trying on a pair of work boots, cooking chicken legs on a backyard barbeque. They smile for the camera, but say their mood is bittersweet as they remember relatives left behind.

Like many migrants, Crespo left Cuba for economic reasons. Once he has a U.S. work permit, he said he’ll join his mother at the meat plant in Schuyler, Nebraska.

“I plan to work hard,” he said. “It’s difficult, but this is how immigrants start out. I have my children’s future in mind.”

His 9-year-old daughter, Emily, and 7-year-old son, Elvis, are in Havana with their mother, Yarisley Rivero, 31.

Rivero said her husband considered applying for a U.S. visa, but couldn’t even get an interview with immigration officers until the year 2027. So he decided to make the dangerous trip from Ecuador to the U.S.-Mexico border.

“What was I going to do?” Rivero asked. “It hurt in the beginning…to think that I was going to be alone with the children, but I couldn’t keep him from going. I miss him a lot. He helped me with the kids, with school and the house and now I am alone.” 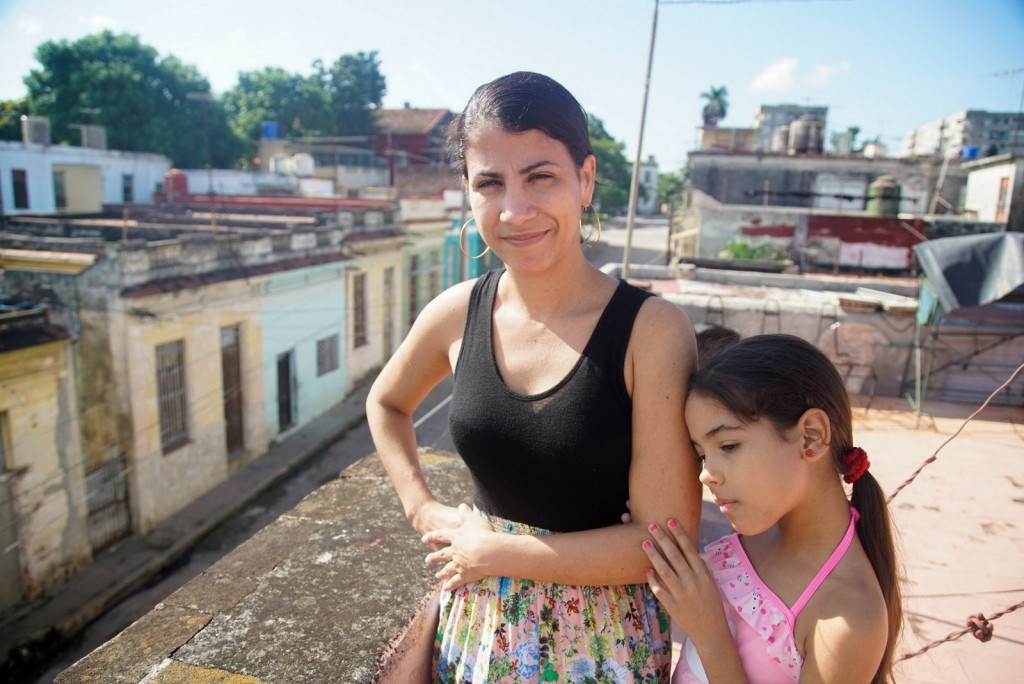 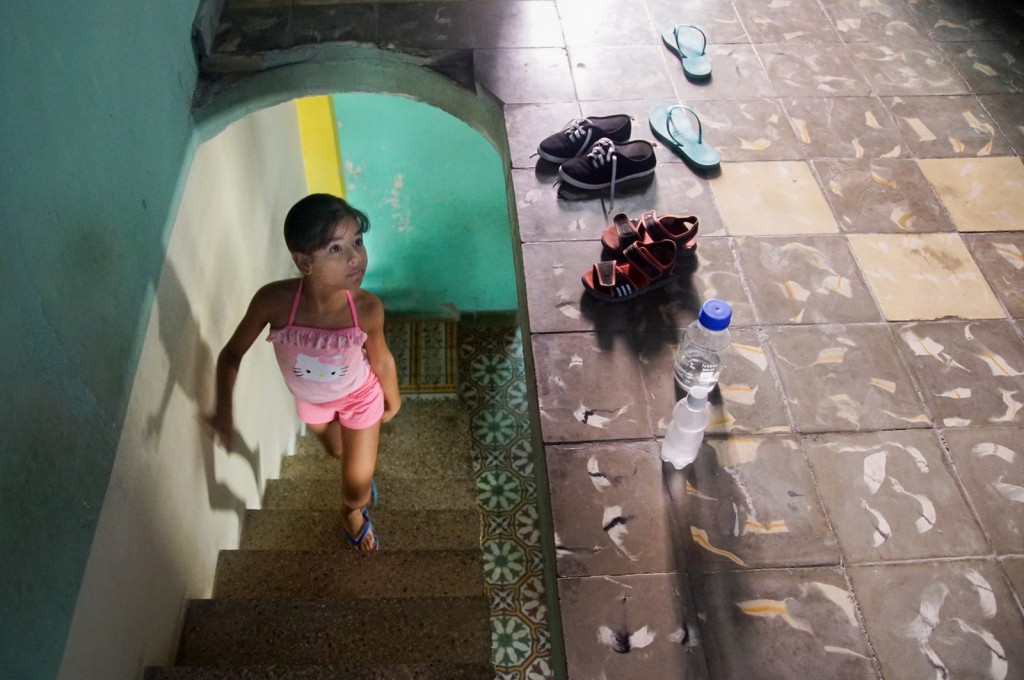 She hopes her husband will get her and the children out of Cuba within a year or two.

Many young people from her neighborhood, called Cerro, also want to leave.

“Everyone comes and meets outside my door. They sit talking about the same thing: Things are bad, I want to leave the country. Every day it’s the same thing,” Rivero said.

“I couldn’t give you an exact number, but quite a few boys have left. Most of them are young.”

The departures have taken a toll on the families. Rivero said her daughter cries every time her father calls. Her son asks, “When is my dad coming home?”

“When my son gets mad at me, he says, ‘I should have gone with my dad.’ That’s what he tells me.” 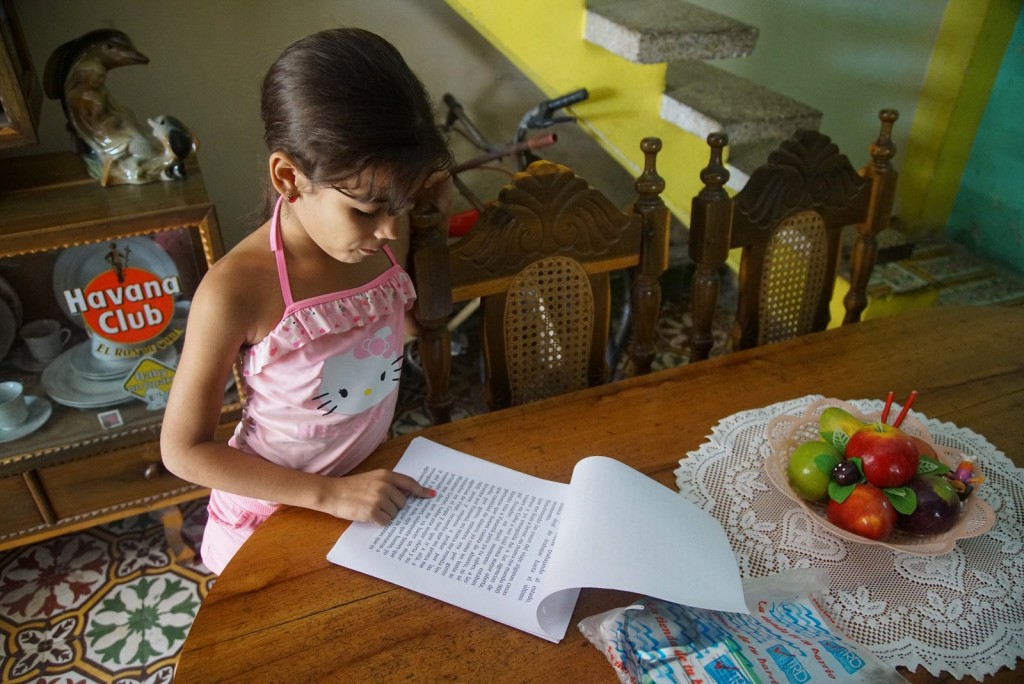 Rivero said she hopes her husband doesn’t forget about her and his children now that he’s in Nebraska.

“I can only wait to see what happens,” she said. “It could be that Joandri will remember me…that he’ll get me out. But maybe not. Many people leave promising things, but in the end they forget about their families. They forget about everyone.”

Mirta Mesa, who lives in Havana’s Vedado neighborhood, said she’s sure her son Julio, the musician, will be back. She doesn’t know when, but she has faith he’ll return.

She stepped into the kitchen and unfurled a poster of her son.

“This is little Julio,” she said proudly. “He has never left my side. He was always very close to me.”

That’s why it was so hard to see him go, she said.

But she doesn’t want him to worry.