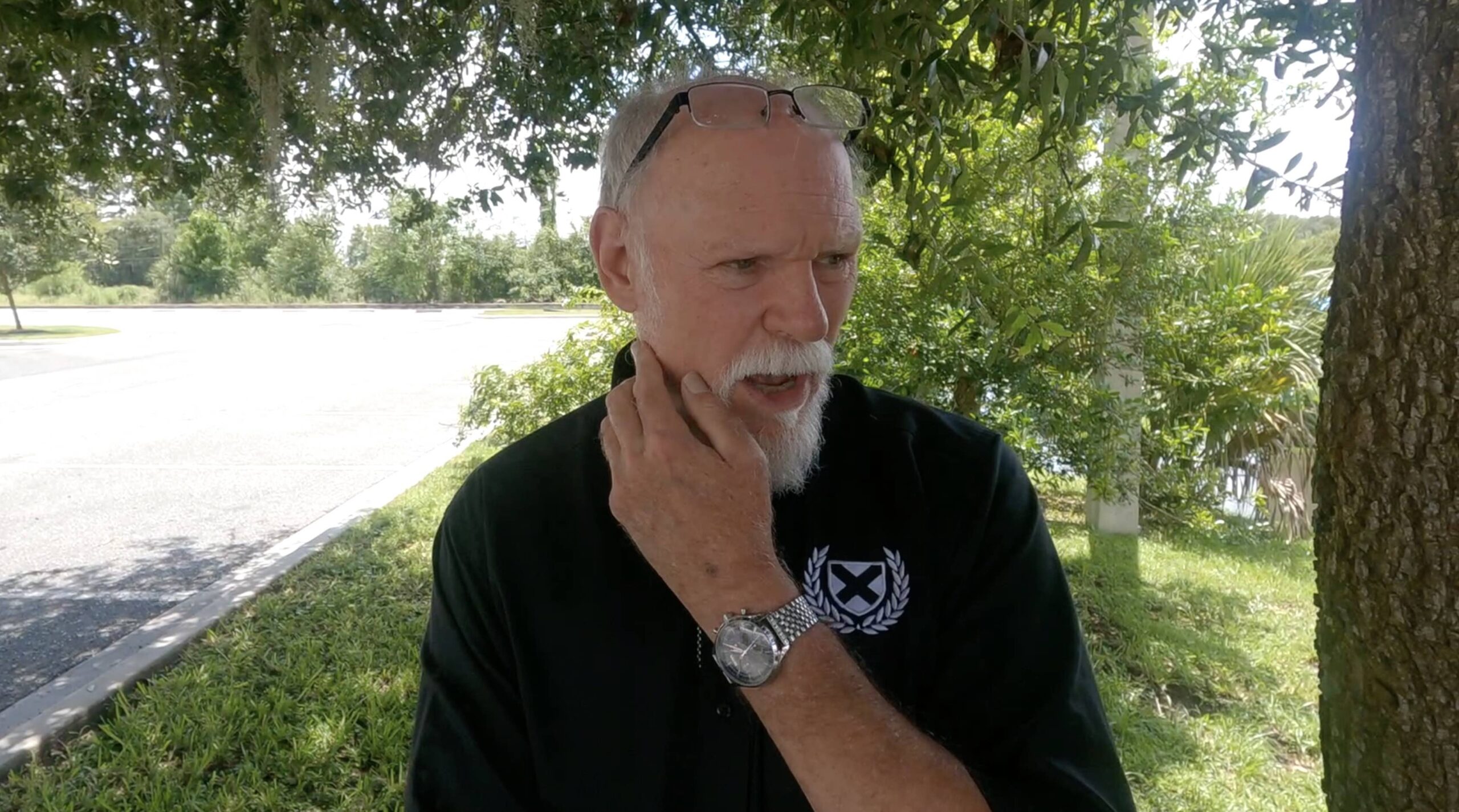 Below is a transcript of my interview with Michael Hill, co-founder and president of the League of the South, a pro-white Alabama organization that supports the secession of Southern states from the U.S. and “a return to a traditional, Christian-oriented Southern culture.”
I spoke with Hill for a documentary project I am making about protesters in America. We spoke under a tree next to a flooded parking lot behind Daddy O’Brien’s restaurant in Lake City, Florida.
The Florida League of the South held its 2021 state conference in Lake City on Aug. 7.

Michael Hill: From the very beginning, we were a Southern nationalist organization with a goal of a free and independent South.

Yeah, we went to Charlottesville in August of 2017 for that Unite the Right rally, and I was to be one of the main speakers protesting the removal of the Robert E. Lee statue, which had been there a hundred and twenty-five years or so. And it turned into a, what the police called riot and it turned into a riot mainly because they stood down and didn’t do anything to stop it. And I’m not the only one who said that there was a report commissioned the Heaphy report commissioned by the city of Charlotte, Charlottesville, who said the same thing, largely the authorities didn’t do their job and let this thing get out of hand. And we ended up getting sued me and my chief of staff and the league itself. We’re defendants in a lawsuit, civil lawsuit.

I wasn’t surprised because I know the way the enemy been doing this for going on, you know, between 25 and 30 years now. And I’ve learned how the enemy operates and it’s not honorably and it’s not based on the truth. So I was not surprised that this happened. I was kind of expecting it, but once it becomes a reality, then, you know, you say, well, now I have to deal with this. So we had to get a lawyer and have had to spend a lot of time over the last almost four years preparing a case and see, you know, waiting to see what’s going to happen. And the charges against us were that we conspired to, to riot and deprive certain locals of their civil rights, which is obviously untrue, but we’ll be going to Charlottesville in October to defend ourselves in a court of law against these charges.

But we have, I guess the biggest disappointment is the fact that a lot of people, even though they will agree with us logically they won’t take the step to become activists because I think the, the Wolf is not at the door yet. And sometimes when the Wolf comes to the door it’s too late, and we’ve been trying to tell people that you need to join us before that day comes. So I’ve been a little disappointed at that, but people are very prosperous and people are comfortable, and they’re very reluctant to get out of that prosperous and comfortable mode to put themselves on the line where they might end up getting hurt, getting involved in some things with the legal system that they don’t want to get involved with. And that, I guess that’s been a big disappointment.

We are more focused on the positive aspects of promoting our own people and our own cause and trying to get people who are native Southerners to love the traditions that have been passed down to them. But the media thinks that somehow that equates to hatred of other people. And it really doesn’t, you know, I, I don’t hate somebody for what God created them to be. I will oppose them if they oppose me, but we’ve tried to have this positive message of loving our own people and civilization and our culture. But as I said, the media always tries to twist that into some kind of hatred, you know, for something or someone.

I’ve studied history, and I know what my ancestors sacrificed for me and for others. And they did it out of a sense of duty, a Christian duty, mainly. And I figured that if I wanted to claim the bloodline of an honorable people, then I would be called upon to do the same, to do the same thing, you know, to, to do my duty and make sacrifices, if necessary. 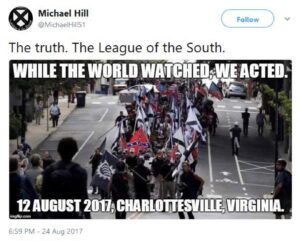 I’m certainly, to be honest, I’m glad that Donald Trump won over Hillary Clinton in 2016 ‘cause I think that would have been a disaster for everybody, but you know, I, I’ve never seen Trump as any kind of savior, anything like that. I don’t completely trust him because he’s, you know, he’s, he’s a politician. Some say he’s a different breed of politician, maybe, maybe not, but that’s mainly the reason I just I couldn’t see, as being a Southern nationalist, voting a national election.

Well, first of all, as a Southern nationalist, a Southern secessionist, I thought it would be rather hypocritical of me to participate in national election seeing that my goal was to get the South out of the, you know, American empire as it were. I thought it would just seem a little hypocritical. And secondly, from a more practical standpoint, it’s hard to find anybody, I thought, that was worthy of my vote.

I will vote in my state local elections. So the question you ask about the, the issue of hatred you know, anybody today who is actively pro-white, you know, when I say pro-white all I mean is, you know, I speak and act in the interest of my own people beginning with myself and my family who were white, and I, you extrapolate that to defend your people in general Southerners, who, you know, I considered the white people. They think that somehow you must hate other people. Well, you know, that just, isn’t true. I mean, if somebody gives me a reason to hate them, I will, but I don’t just hate people because they happened to be different from me. And I’m I’m always you know, we’re, we’re kind of a meme society today with social media and everything, and there’s one that kind of sums us up. You got a picture of a Black man saying I’m proud to be a Black man, you have a picture of an Asian guy saying I’m proud to be an Asian. You have a picture of a Hispanic guy saying I’m proud to be Hispanic. And then at the bottom you have a picture of racist saying I’m proud to be white. You know? Well, if you’re going to apply the term racist to anybody who speaks well of their own people and acts in their own interest, well let’s either call everybody a racist or nobody or racist, You shouldn’t just single out white folks. And because that’s being done, I have suspicions that somebody out there is doing this who doesn’t like white folks. So I think the hatred is on the other side and not on our side.

Question: And if there were to be a secession, what place would Blacks have in that society?

Michael Hill: Well, you know, I’m not sure. I, I do think that that would be dependent upon their ability to, or an intent to be good members of society. I mean, anybody who works, anybody who obeys the law, anybody who minds their own business, I personally wouldn’t have a problem with living around, but I don’t believe in giving people favors because they happen to be Black or, or whatever. And I don’t, at the same time, feel like they should be persecuted for that. But I do, I do demand this and that is, this is our home. We should be the majority. We should make the rules. And if we allow other people to live with us, they abide by our rules, just like I would abide by their rules, regulations, culture, traditions, laws if I went to live in a country in which they were predominant.

So I think the multicultural melting pot thing has proven itself to be a disaster and not just for whites, but for everybody. Because I think you’re trying to force a square peg into a round hole. I just don’t think it’s natural. I think that God created the races, the different ethnicities within the races as the nations to live within their own boundaries, bounds and habitations, I think that is what the Bible, the terms the Bible uses. I think it’s a very natural and a very biblical thing. So if it is natural, if it is biblical, then I must support it as a Christian.

You know, the idea of people living with their own cultural traditions and not melting them away, or blending them into something else and changing, not just them, but everybody else’s, I think would be a catastrophe and people on the left always talk about diversity, but yet they want people to sort of blend in with this multicultural thing. And in the end you have nothing but a big blob of non culture, you know, and I understand why Black people or Hispanic people or Asian people want to preserve their own way of life. And if you mix all those things up, nobody has anything that you need. And I think that the uniqueness of God’s created order, the diversity of it, is something that we, by being Southern nationalists are helping to push along, which I think is a, as I said, a very biblical thing, very natural. So we just trying to do what we think is best for our people. And we’re willing to grant that same thing to other people who want to do the best that they can for their people.