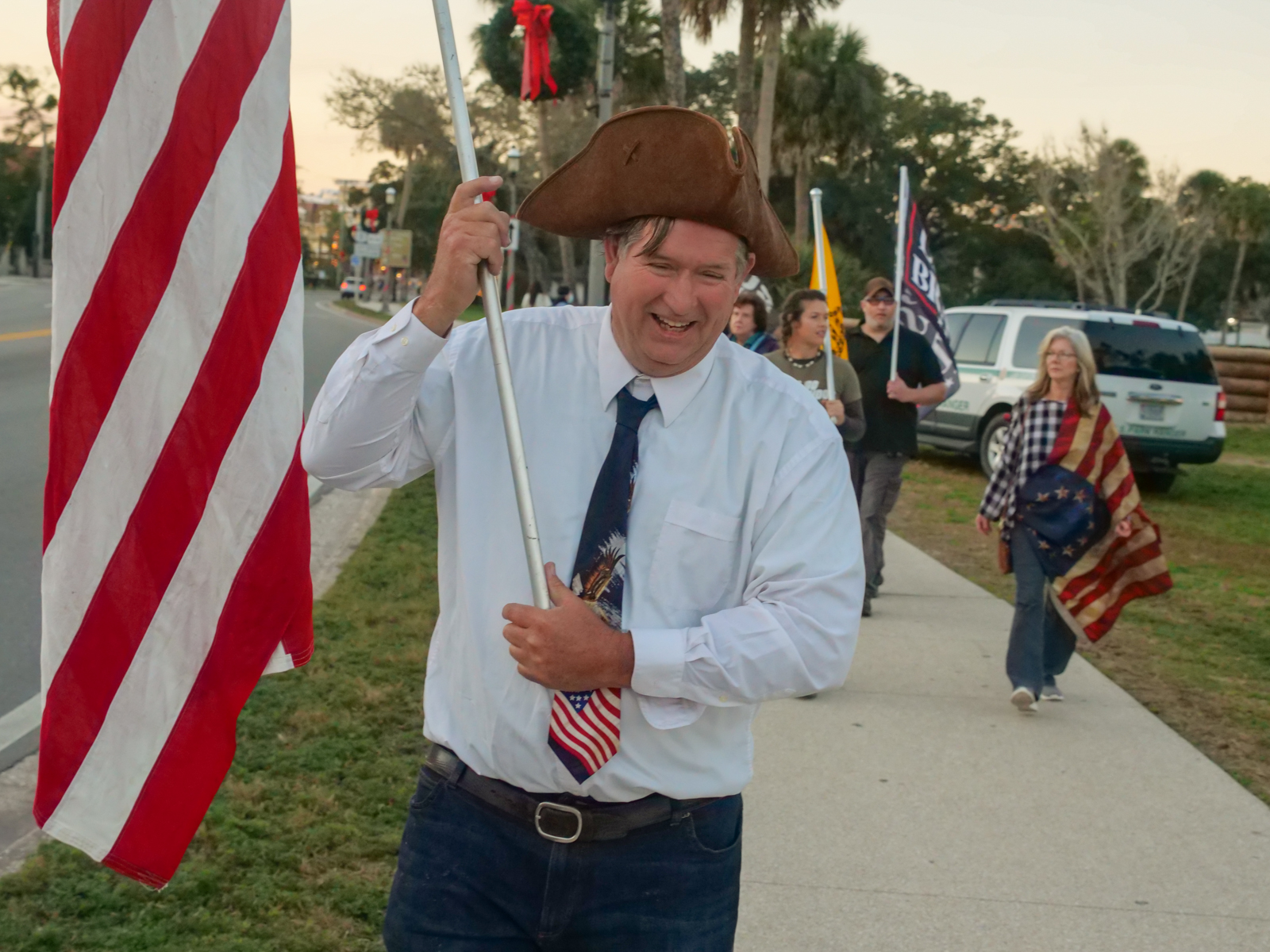 Federal prosecutors have charged two members of a Lakeland, Florida, family with crimes in connection with the Jan. 6 protests in Washington, D.C.
Olivia Pollock was arrested in June 2021 and must wear an ankle monitor while awaiting trial. Her brother, Jonny, was also charged, but is at large.
Their father, Ben, told me that the federal government accuses the family of being part of an armed militia. He denies that and said the government is targeting conservative Christians who support gun rights and the Constitution.
I have been following the Pollock family to better understand their views and the challenges they face as the federal government prosecutes Olivia and pursues Jonny.
Below are interviews with family members, their relatives and friends.

June 2022
J6 defendant: “Doing everything we can for the guys who are in prison”

Olivia Pollock is making art that will be sold at a silent auction in support of J6 defendants. “We’re just trying to do everything we can for the guys who are in prison right now, and hopefully help them out, their families. They’re suffering a lot more than we are. I’m out and I’m not stuck in jail,” said Pollock, who was charged in connection with the Jan. 6 protest and must wear an ankle monitor.
“I tell people all the time. They say how are you doing? I say, ‘We’re free,’ you know, for the most part,” said her father, Ben Pollock, who attended the Jan. 6 protest, but was not arrested.
“We’re not in some Gulag where we’re being tortured for our political beliefs like these other men. By the grace of God, my family is out of prison.”

An interview with Samuel Doolin, whose brother, Joshua Doolin, was charged in connection with the Jan. 6 protests in Washington, D.C.

Vimeo said it removed this video for violating its guidelines.” Vimeo’s guidelines state:
“Misinformation about U.S. Elections. Due to its proven capacity to stoke real-world violence, we do not allow content that spreads false or misleading claims about the results of any election within the U.S. In particular, content that claims that the 2020 presidential election was fraudulent or stolen or otherwise illegitimate will be removed.”

The video contains an interview with Gabriel Pollock, the owner of Rapture Guns and Knives in Lakeland, Florida, and brother of Olivia and Jonny Pollock, both of whom have been charged in connection with the Jan. 6 protests in Washington, D.C. I also spoke with Thomas Osborne, who took part in the Jan. 6 event. They told me the government investigation has had a profound impact on their lives and that of their family and friends.
The FBI is “just they’re putting more and more pressure on people,” Gabriel Pollock said.
Pollock’s brother, Jonny, remains at large. His sister, Olivia, must wear an ankle monitor pending trial and has not been given a court date.
“We still have prisoners, Jan. 6 prisoners, that are still locked up in prison that have not received a court date,” Gabriel Pollock said. “Nobody’s actually gone to trial over this yet, and it’s been over a year. We’re right at that anniversary, right there at the year anniversary, and people still have not received a court date. Our right to a speedy trial is is thrown out the window. When you’re serving a year in prison and you haven’t even stood before a judge, you know there’s something wrong. The system is broken. And that’s why I feel that there is a huge disconnect between the federal government and we, the people, who give the federal government their power. They no longer work for us. They have they have separated themselves from the rule of the people, and they’re working independent of our will. And that’s very scary.”

August 2021
Jan. 6 protester: “We’ve lost our country”
A Florida man whose son and daughter were charged in connection with the Jan. 6 breach of the U.S. Capitol said he doesn’t regret going to Washington, D.C., that day.
“I don’t know if you know about Christianity, but if you have an unclear conscience, God won’t let you sleep. He will not let you sleep. And when I got home, I told everybody, I said, ‘I don’t have an unclear conscience,’” Ben Pollock said in an interview at his home in Lakeland, east of Tampa.
Jonathan Pollock, and his sister, Olivia, were charged with crimes after the Jan. 6 episode. Their father said the U.S. government has unfairly maligned him and his family. “They’re trying to make us out to be like these white supremacists or these, uh, is just the furthest thing from the truth.” 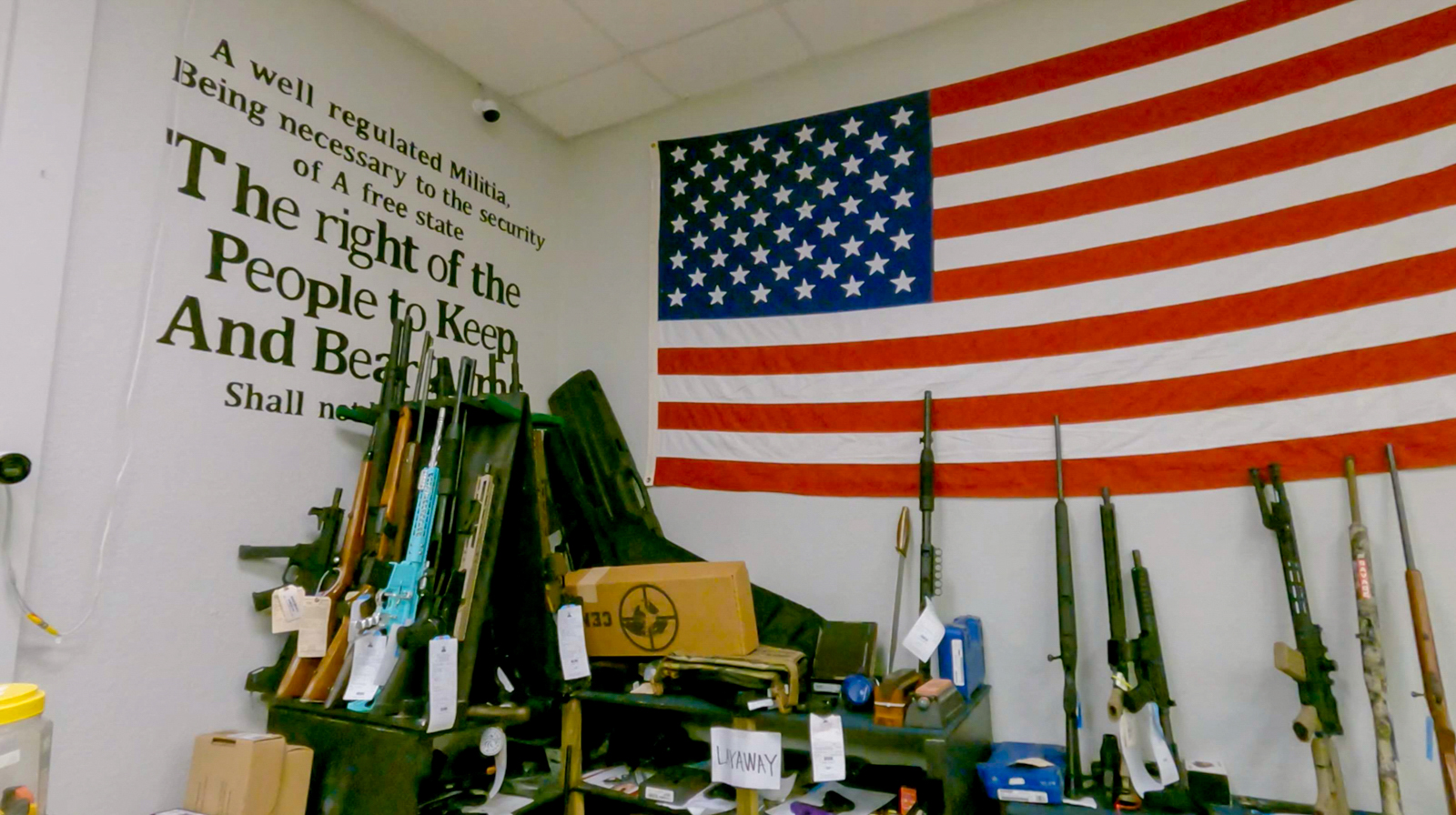 September 2021
Florida man says God is protecting his son, a fugitive
Jonny Pollock remains at large more than 12 weeks after the FBI raided the family’s home just outside the city limits of Lakeland. His sister, Olivia, was arrested and must wear an ankle monitor while awaiting trial in connection with the Jan. 6 protest at the U.S. Capitol Building.
Their father, Ben, said the federal government’s prosecution of his children has been agonizing.
“When it first happened, I never realized how traumatizing it would be,” he said. “And there was times where I would just cry at the bed and say, ‘Lord, I don’t know how to help Jonny. I don’t know how to help Olivia.’”

November 2021
In pursuit of a fugitive

I spoke to Jan. 6 protester Ben Pollock the other day as part of a documentary project I have been doing. In this short clip, he describes what happened after sheriff’s deputies mistook his son James for his other son, Jonny, who has been on the run since being charged in connection with the Jan. 6 protests in Washington, D.C.

November 2021
Jan. 6 protester: “We need outrage”
Two of his eight children were charged in connection with the Jan. 6 protests in Washington, D.C. One of them is awaiting trial and must wear an ankle bracelet. The other is at large.
“They’re still desperately trying to link us to a militia,” said Ben Pollock, who lives just outside Lakeland, Florida. “Our house is bugged. They’re listening to everything that’s going on here. They’re watching. They’re spending millions of dollars watching us. And why the American people are letting them get away with it, I don’t know. We need outrage. Where’s the American people’s outrage?
“The J6 people were in the right to, you know, to take our Capitol back, no matter what everybody else says. I’m proud of them. Those are my boys that are locked up in that prison right now. They are my children… And if this country don’t wake up, we’ll all be in there.”

November 2021
J6 protester: “You’ve got to be willing to die for your freedom”
Vimeo also removed this video for violating its guidelines.
Jan. 6 protesters Ben Pollock and Thomas Osborne discuss the importance of gun rights, the Second Amendment and other issues.

Dozens of agents swept into the Pollock residence before dawn on June 30 to try to capture two people charged in connection with the Jan. 6 protest in Washington, D.C.
Olivia Pollock, 30, was caught, but her brother Jonny wasn’t found and is one of the few Capitol breach defendants who has been charged but remains at large.
The FBI considers Jonathan Daniel Pollock, 21, to be armed and dangerous, but his family members in Lakeland, Florida, say it’s not true and they fear for his safety.

August 2021
Jan. 6 protester: “We’ve lost our country”
A Florida man whose son and daughter were charged in connection with the Jan. 6 breach of the U.S. Capitol said he doesn’t regret going to Washington, D.C., that day.
“I don’t know if you know about Christianity, but if you have an unclear conscience, God won’t let you sleep. He will not let you sleep. And when I got home, I told everybody, I said, ‘I don’t have an unclear conscience,’” Ben Pollock said in an interview at his home in Lakeland, east of Tampa.

August 2021
Gun store owner: Freedom is slipping away in the U.S.

Benjamin Pollock, a gun store owner in Lakeland, Florida, worries that the United States is heading toward communism and urges Americans to stand up against what he sees as a “runaway” federal government.
“I see encroachment on the Second Amendment and I see people cowering down,” he said. “They’re talking about hiding their guns. They’re talking about burying their guns. And if it comes to that, you’ve lost. You’ve lost your country and you’re never going to dig those guns up.
“We look at countries around the world that have gone to communism, that have gone to socialism. And every time, the people are silent, the people don’t stand up and they don’t let their voice be heard. And so for right now, I feel like it is so important for people to get out there. And if you have an opportunity to go to a rally to let your voice be heard, now is the time that you need to get off the couch and to go out because our country is being taken away from us. And if we don’t do something about it, it’ll be gone.”