I wrote this story for the Dallas Morning News. It was published on May 21, 2000.

Lost in the rumble and grit of passing rail cars and tractor-trailer rigs is a quiet place where angels live.
The tiny winged creatures peek out from cubbyholes and corner tables, standing guard as Beatriz Jordan lights a candle for her dead son. Then she pours him a fresh glass of water.
“This is where Bruno lives,” she says. “Here with the angels.”
Five winters have passed since an assailant killed the popular pre-law student in a carjacking. Yet even now, the murder continues to claim victims, wrecking lives and families like a curse. Beatriz Jordan, 76, and her husband Antonio, 79, agonize over Bruno’s murder as their twilight years rush by.
Their youngest son – the heart and soul of the Jordan family – was gunned down at 27 and the killer ran free. “It’s so unfair,” she says, crying.
The couple’s oldest son, Phil Jordan, a former U.S. drug agent who lives in Plano, is convinced that Mexican drug traffickers ordered the killing to intimidate him. Haunted by guilt, he has tried to solve the slaying himself, a quest that wiped him out financially and helped destroy his second marriage.
“The darkness” is how he describes what he’s been through.
Fellow drug agent Sal Martinez – cousin to both Phil and Bruno Jordan – is another tormented soul. He says he never cried harder thanat Bruno’s wake, but kept the pain inside after that.
Relatives were stunned when the FBI in December charged Mr. Martinez,37, with plotting to avenge Bruno’s death. The agent denied the charges at first. “If I was doing something like this, call the loony farm and have me committed,” he said days after his arrest.
He later pleaded guilty, saying he didn’t want his family to endure a trial. And next month, he leaves for a new home: Federal prison, where he’ll spend seven years. “The brutal death of my cousin … led me to think with my heart instead of my head,” he told a Laredo judge.
It’s a familiar tale of immigrant families, blood ties and revenge.But the backdrop this time is the rambling U.S.-Mexico border, a modern-day Casablanca, a place of wanderers and workers, killers and crooks, men of the law and men of the cloth.
With its multihued blend of humankind, the border often brings out the best in people, the unrelenting desire to work and dream. But somesay it also can bring out the worst, the bitterness, the urge to kill. And sometimes, as the Martinez and Jordan families found out, the line between good and bad can become confused.
* * *
If this crime saga has a beginning, it might as well be that cold January night in 1995 when Bruno drove to an El Paso Kmart to drop off a friend’s new Ford Silverado.
Suddenly, someone jumped out of a black pickup truck and shot him with a 9mm pistol. Bruno, alone that night, staggered to the back of the Silverado. The assailant fired again and Bruno was dead.
Now, on another crisp January night five years later, his mother is in the kitchen stirring a pot of beans. Her son, Phil, hugs her and settles his broad, 6-foot-3 frame onto a chair.
He’s back on Frutas Street, where he once swatted baseballs and played cops and robbers. The familiar scent of beef tacos wafts through the air as it has, well, just about forever. But he’s not feeling too nostalgic.
At 57, he’d like to slow down and worry less, but he can’t. He’s angry. He gave his life to law enforcement, but when he needed something in return, a meager shred of justice, he says, he got nothing.
The prime suspect in his brother’s murder was a Mexican teenager 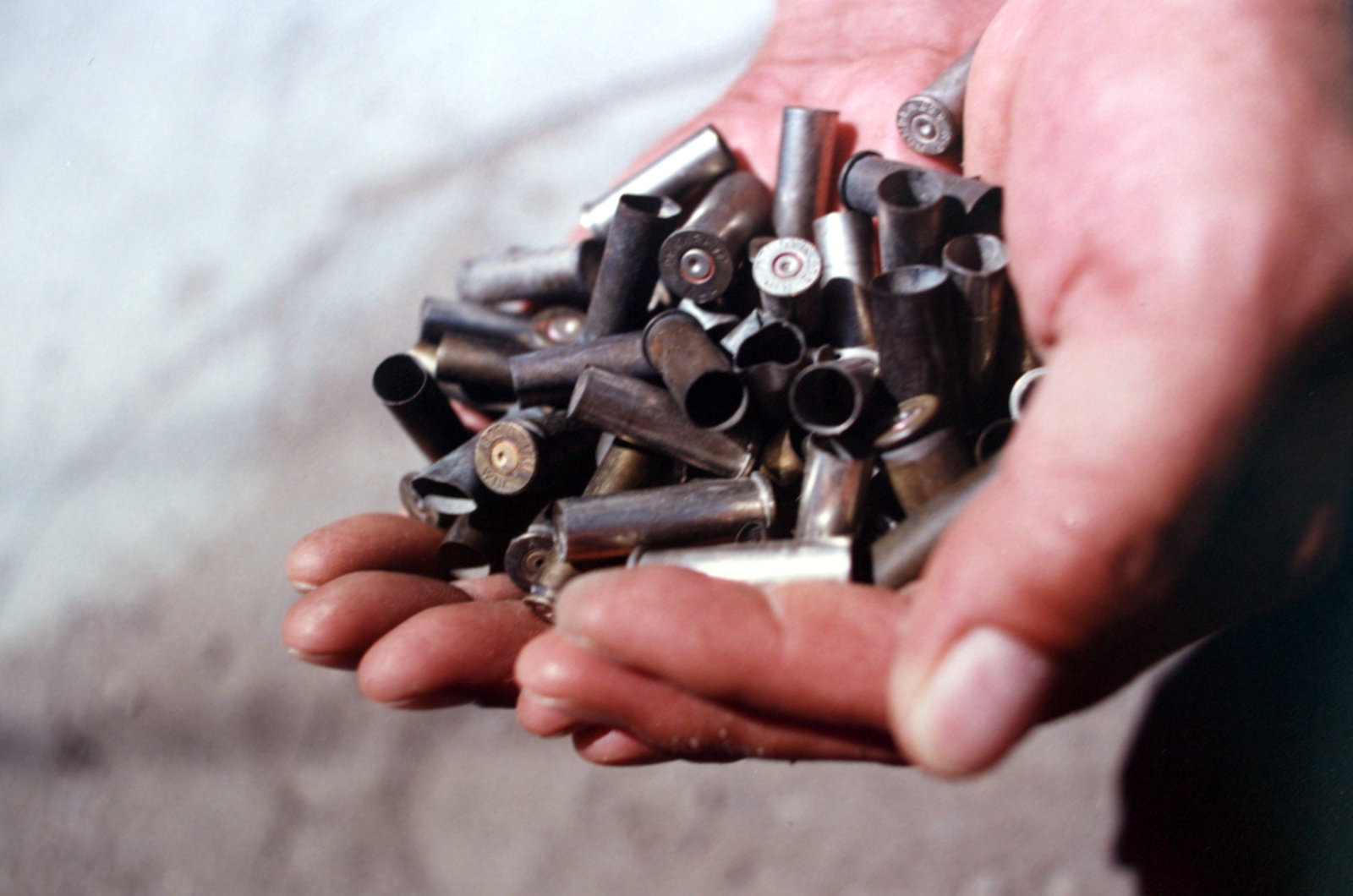 Mr. Martinez was also patriotic, an agent friend says. Fearless, too, but “too damn trusting.”
His job required him to schmooze with Mexican agents, but Mr. Martinez sometimes went too far, taking them drinking, the agent says.
If Mr. Martinez had been an insurance agent from Peoria and not a drug agent from the raucous borderlands, things might have been different. But he grew up seeing life’s rough side. He saw what traffickers did: Daylight executions, bodies dumped in ditches, hands and feet bound, signature gunshots to the head and chest.
Residents in El Paso, a hot drug corridor, often suspected who thegangsters were. A man named Vicente Carrillo, a boss in the Juarez gang, would venture into town in his sleek green Lexus. People whispered about the $100 bills he threw around, but they asked few questions.
Mr. Martinez had to ask questions, which was risky business. A gang of traffickers and corrupt cops once swept in with automatic weapons andthreatened to kill him, he says, while he was alone in Juarez investigating a multi-ton drug load.
“I was ready for a shootout,” he says. “I had my submachine gun and pistol with me. If anybody had popped off a shot, it would have been a bloodbath. I was always putting my life in danger. Instead, they kill Bruno, a nice guy who sells suits for a living.”
* * *
In September 1999, Sal Martinez drove to an Exxon gas station in McAllen, Texas, and met with Jaime Yanez, a Mexican state police chief he had gotten to know a few years earlier.
The agent handed the police chief an envelope. Inside was a Polaroidphoto of Smurf. Mr. Martinez allegedly asked the commander to arrange Smurf’s murder. Instead, the cop told the FBI about it.
Later, the commander secretly taped Mr. Martinez. The DEA agent allegedly showed him a pistol – a blue-steel .38-caliber Colt – andpromised him at least $10,000, the FBI says.
The FBI arrested Mr. Martinez on Dec. 14. Days later, the agent said he was stunned. “My emotions were misinterpreted and built into a criminal case … I’m not a criminal,” he says.
Phil lashed out at U.S. authorities.
“If the FBI had spent a fraction of its time investigating the carjacking murder of my brother, maybe we wouldn’t be in this predicament,” he says.
Top DEA officials were quick to condemn Sal. But many agents backed him. DEA Watch, a Web site that posts the views of special agents – S/A’s – reported the latest buzz.
“The only criticism I have for this S/A is that he did not do the job himself,” an agent wrote Dec. 14.
The Watch also told agents how to help Mr. Martinez with his legalbills. The feeling then was that the FBI had set him up. And while theFBI won’t comment on that, prosecutor Mary Lou Castillo points to a single fact: On Feb. 3, Mr. Martinez pleaded guilty.
“People who are truly innocent are not going to rush to plead guilty,” she says.
Mr. Martinez says prosecutors played hardball, telling him they were going to pile on more charges if he didn’t cave in.
“I only had 48 hours to decide,” he says. “It was, “Take the deal now.’ ”
“It’s too scary to try to fight it in court,” says his wife, Suzie. “It would have been too messy.”
* * *
Back on Frutas Street, Beatriz and Antonio Jordan are in the white frame house where they’ve lived since 1947. The trucks have stopped rumbling by, and only the distant sound of barking dogs breaks the night air.
Beatriz has turned Bruno’s old bedroom into a shrine of sorts. His books on Texas penal code and cracking down on teen offenders are in a neat row, and his old lottery tickets are in a box. Relatives sometimes play his favorite numbers … 746 and 835.
A poem – a tribute to Bruno – is on a wooden dresser. “You are where the sun never sets, where the wind is no longer cold, where peace of heart, soul and mind are one,” it says. “You are our future.”
Beatriz says she sometimes tells the priests and nuns at church how much she misses Bruno. She also has her angels, some arranged so they appear to gaze at photos of her son. And she’s sure Bruno hears her when she prays.
Of course, that’s not enough. She says she wants him back, then starts to cry. “It helps. I need to talk about it.”
But no one believes she’ll ever be the same. And even though she and her husband built a new home away from the barrio, they don’t plan to leave the house where angels stand guard.
“I can’t,” she says. “This is where Bruno lives.”