“He was a happy, happy person,” said Connie Blue, a longtime friend. “He just loved being around people.”

But on Sept. 27, tragedy struck. Jones, 38, was beaten and his feet were bound. Then he was tied to the back of a stolen Dodge Caravan and dragged, naked, for more than two blocks along West 36th Street in Jacksonville, sheriff’s deputies say.

A surveillance camera recorded part of the ordeal, but deputies said the footage was so horrific they couldn’t release it.

Security cameras in front of the Majestic Palace Apartments caught the assault on tape. 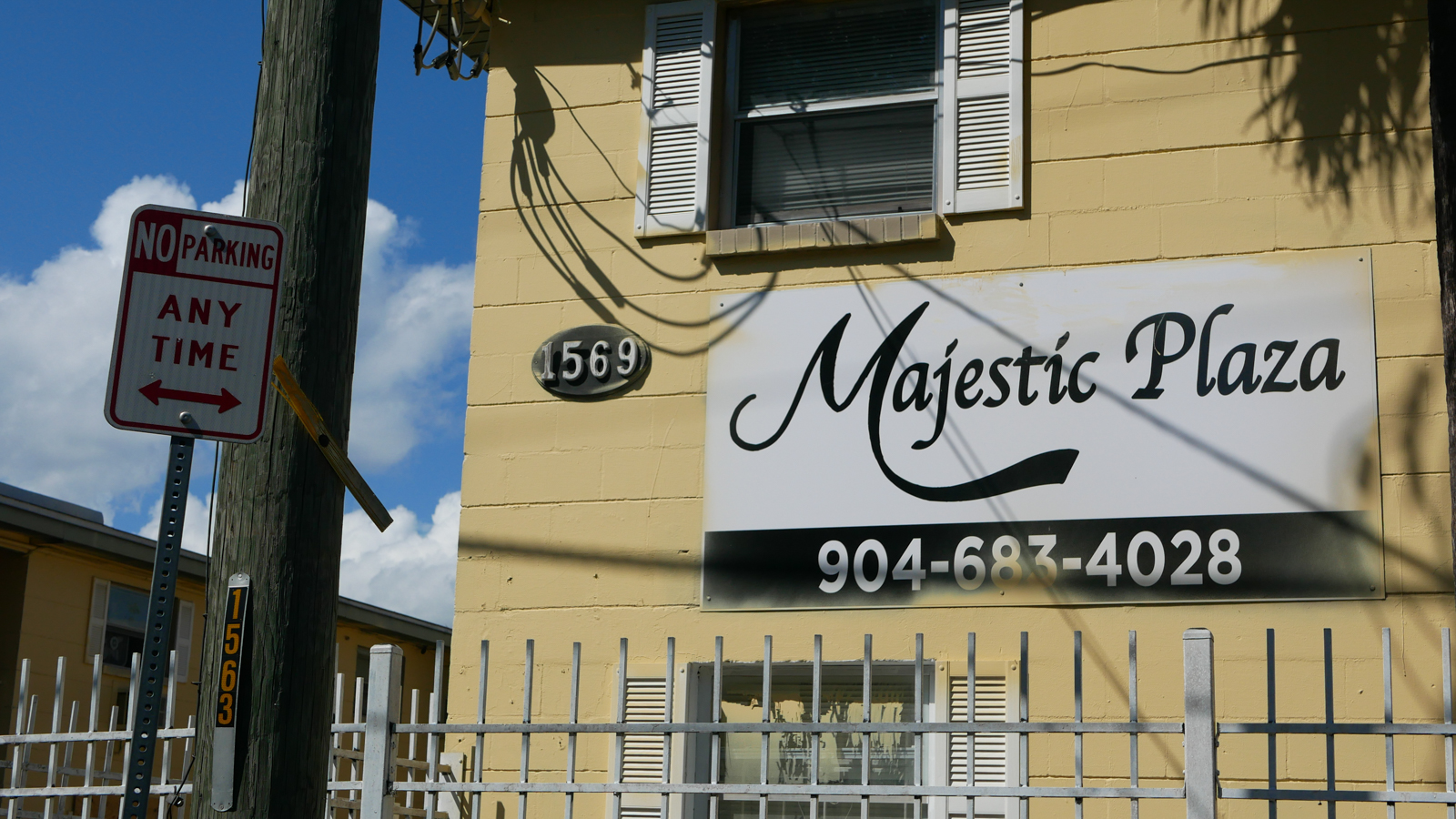 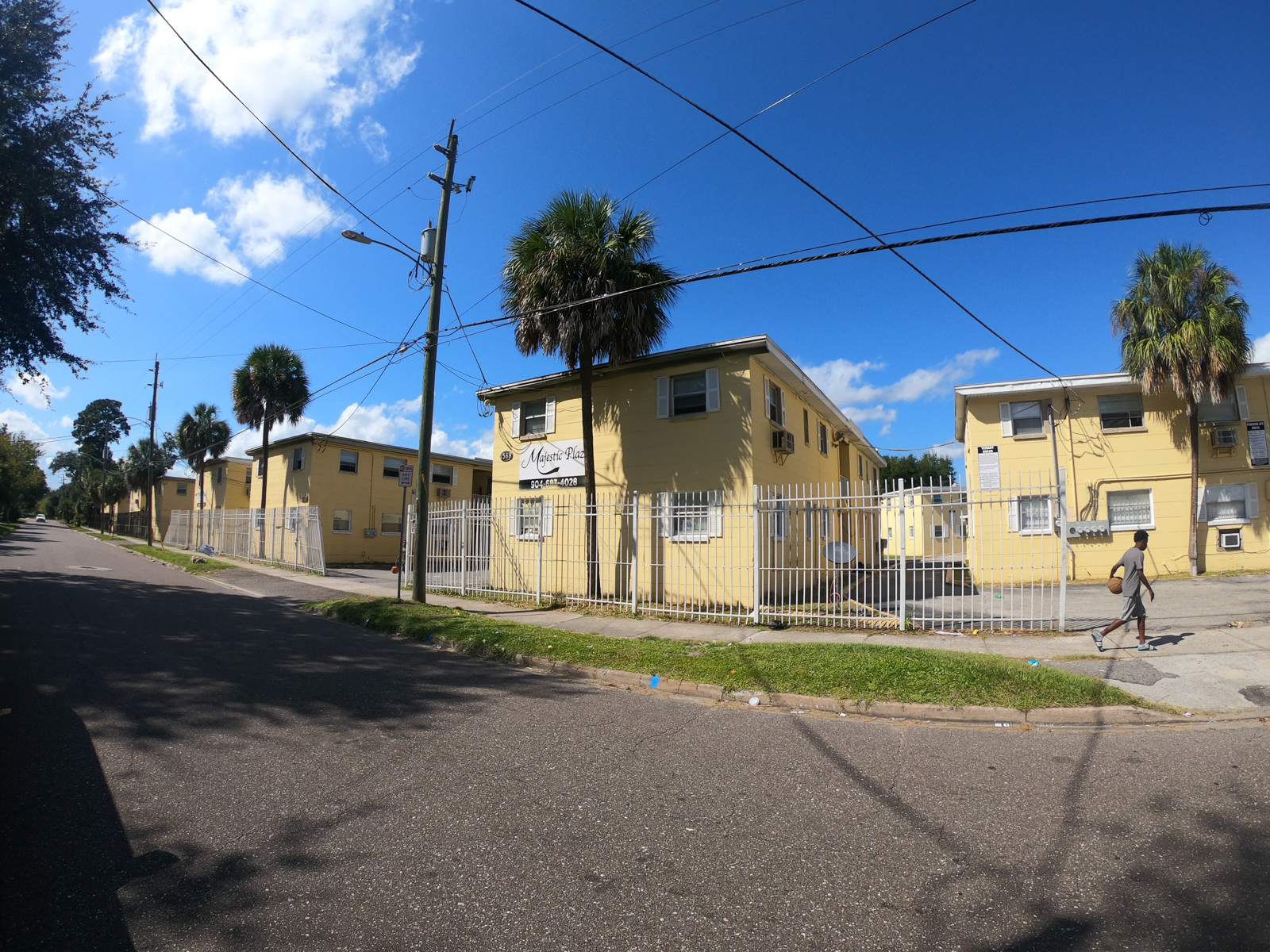 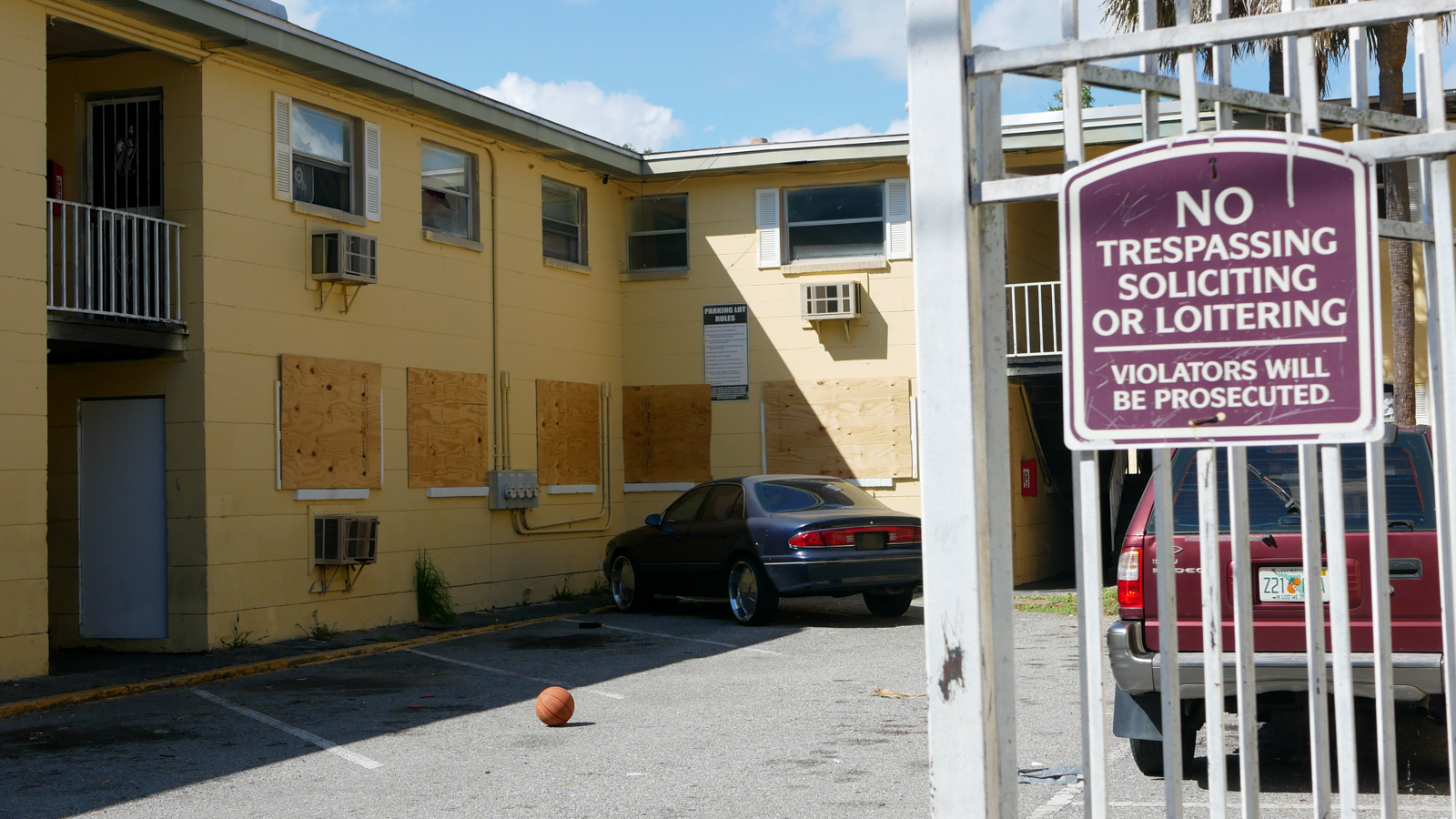 “I know my friend didn’t go down without a fight,” Blue said. “I know that for a fact.”

On Sept. 29, detectives charged Eric Shaun Bridges, 34, with attempted murder. Bridges, who is being held on $500,003 bail, has a rap sheet that includes fleeing an officer, reckless driving, leaving the scene of an accident, resisting an officer with violence, battery, possession of burglary tools and possession of cocaine.

On May 15, 2010, a judge gave him 9 ½ years for auto theft and other crimes. He left prison after seven years and three months, records show.

He “denied having any involvement in the incident,” an arrest report said.

Members of the LBGTQ community are alarmed. They consider Jones one of their own.

Blue said Jones did not consider himself a transgender woman, but he did wear women’s clothes.

“Demetrick tells me all the time that he’s just a man with a sexual preference,” she said. “He enjoyed wearing women’s clothing. You could still tell that he’s the man. But he did dress up as a woman.”

Court records in 2016 alternately listed Jones as male and female. He has not regained consciousness since the attack, friends say, so he can’t be asked about it.

Chloie Dianna Kensington, 38, a transgender activist and performer, worries the attack might have been a hate crime.

Jacksonville was dubbed “America’s transgender murder capital” in 2018 after three black trans women and one queer man were killed in the city.

“Last year I was asked, ‘Are you scared?’ And I kept saying, ‘No, no, I just wasn’t scared.’ But in the last week and a half, I’ve literally thought to myself, going into the store or whatever, look behind you. You know, just be aware,” Kensington said.

“That hatred, that ignorance, is rising again. My question is, how do we stop it?”

“I’ve never really been an advocate of civilians with guns. I’m not an advocate of assault weapons, but I am an advocate of self-preservation and self-protection. If the police won’t protect and serve the way that they should, then I do think it’s up to each of us to take our safety into our own hands.”

She said the attack on Jones reminded her of a lynching.

“Well, you know, it happened to black people all the time at one point,” she said. “Just walking down the street being who you are and you were lynched and dragged and hung from a tree.”

Jones was found badly injured shortly before 7 a.m. in a crime-ridden neighborhood northwest of downtown. A man was shot to death five blocks away in an unrelated crime that same morning.

“Nobody coming into the barbershop because of all this killing,” said Bobby Stevens as he gave a customer a shave at Mop City Barber along Moncrief Street. “This neighborhood can be deadly.”

“An assault on one of us is an assault on all of us,” said Wilkes, manager of the Metro Entertainment Complex, which caters mainly to the LGBTQ community.

In August 2018, Sheriff Mike Williams announced the creation of a liaison team aimed at improving communication with the LGBTQ community.

Kensington applauded the move but said sheriff’s deputies still don’t do enough to reach out to the LGBTQ community.

Another trans activist in Jacksonville agreed.

“They need to go out into the neighborhoods,” said Paige Mahogany Parks, founder of the Jacksonville Transgender Action Committee. “They need to be at the gay clubs. They need to hold a town hall meeting for LGBT people.”

Friends are hoping for justice

An unnamed relative told Jacksonville’s News4Jax that Jones was in critical condition and was “fighting for his life. Whenever he recovers, he wakes up, we are just going to move forward and just put it behind us.”

“He didn’t deserve this from that deranged man,” said Eric Tarver, of Ocala, Florida. “He was a very caring person” and loved his siblings and his mother, who is disabled. “He is loved by many.”

Blue said she has known Jones since 1995.

“I have seven kids,” she said. “He helped me raise most of them. I’ve known Demetrick since he was 18 years old.”

She said after she learned he had been attacked, “I just got chills all over my body. I knew it was my best friend.” 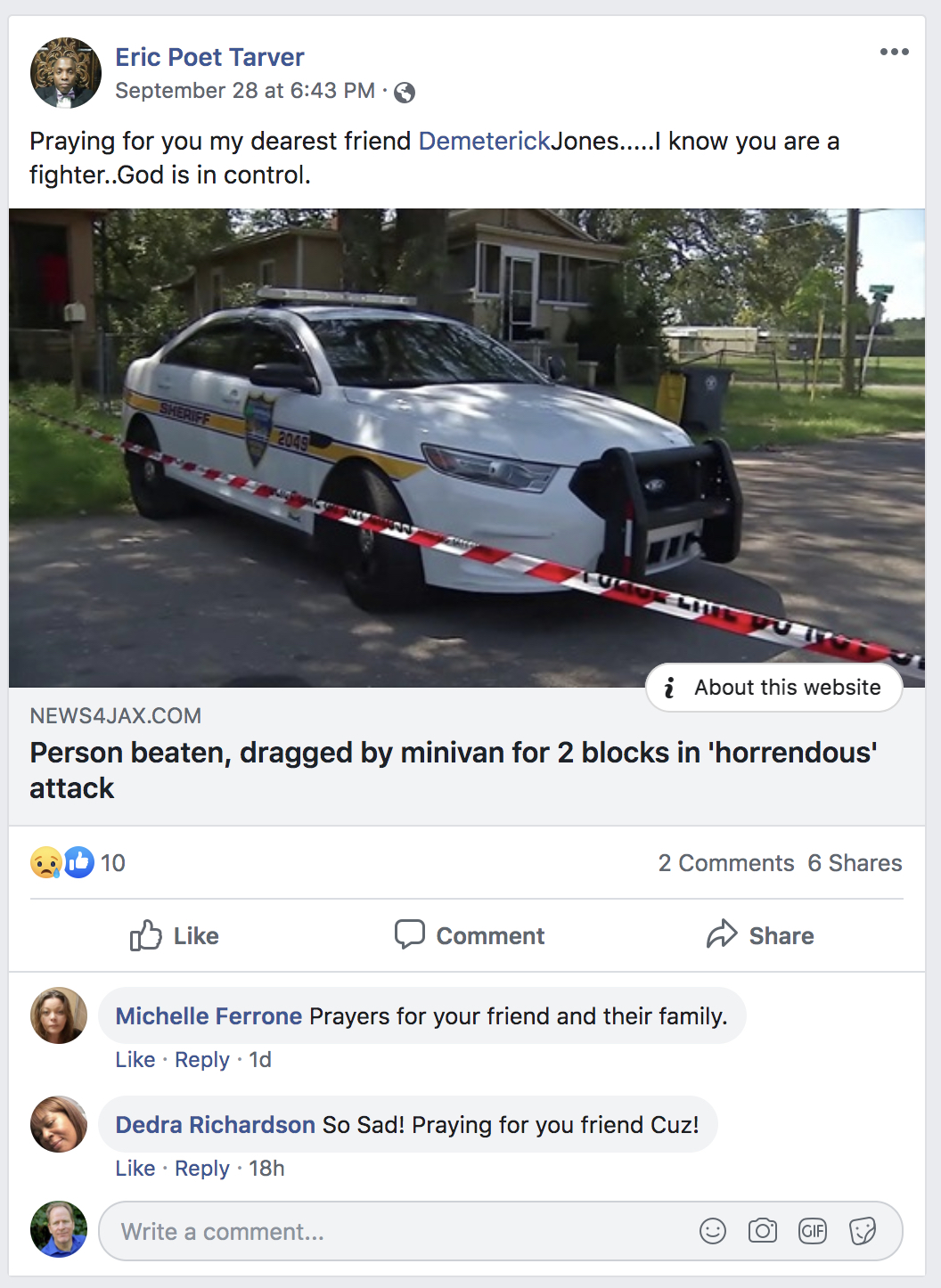 Another friend, who goes by Omar Shabazz on Facebook, told Business Insider he had known Jones socially for more than a decade. “He was always a very sweet and fun-loving person.”

Jones has had some health issues over the years, Blue said. He has occasional seizures. He is easily distracted. Blue suspects he has Attention-Deficit/Hyperactivity Disorder, or ADHD.

“He had the mind of a child,” she said. “Some people took advantage of him. But he was never a sad person. Demetrick has a heart of gold. Everyone loved him. I have not met anyone who had a problem with Demetrick. He has a lot of people out here that love him and I hope he makes it. I really do.”

Deputies say if anyone has any information about the crime, they should contact the sheriff’s office at 904-630-0500 or JSOCrimeTips@jaxsheriff.org.