I wrote this story for Al Jazeera on Dec.17, 2015, the day that the United States and Cuba announced that they were re-establishing diplomatic relations. (See original version).

Havana, Cuba – Cubans hugged each other and cried. They marched and cheered. They gathered on street corners and in cafeterias to talk about the stunning news that Cuba and the United States were restoring diplomatic ties after decades of hostility.

Nuñez, 66, thanked President Barack Obama for releasing three Cuban intelligence agents who had been jailed since 1998.

“I’ve prayed for them every night,” said Nuñez, who sat on a street corner selling homemade cloth dolls for about a dollar each. “I’ve asked God for their freedom.”

The spies – Gerardo Hernandez, 49, Antonio Guerrero, 56, and Ramon Labañino, 51 – were returned to Cuba on Wednesday. Two others – Rene Gonzalez, 58, and Fernando Gonzalez, 51 – were released earlier before completing their sentences. 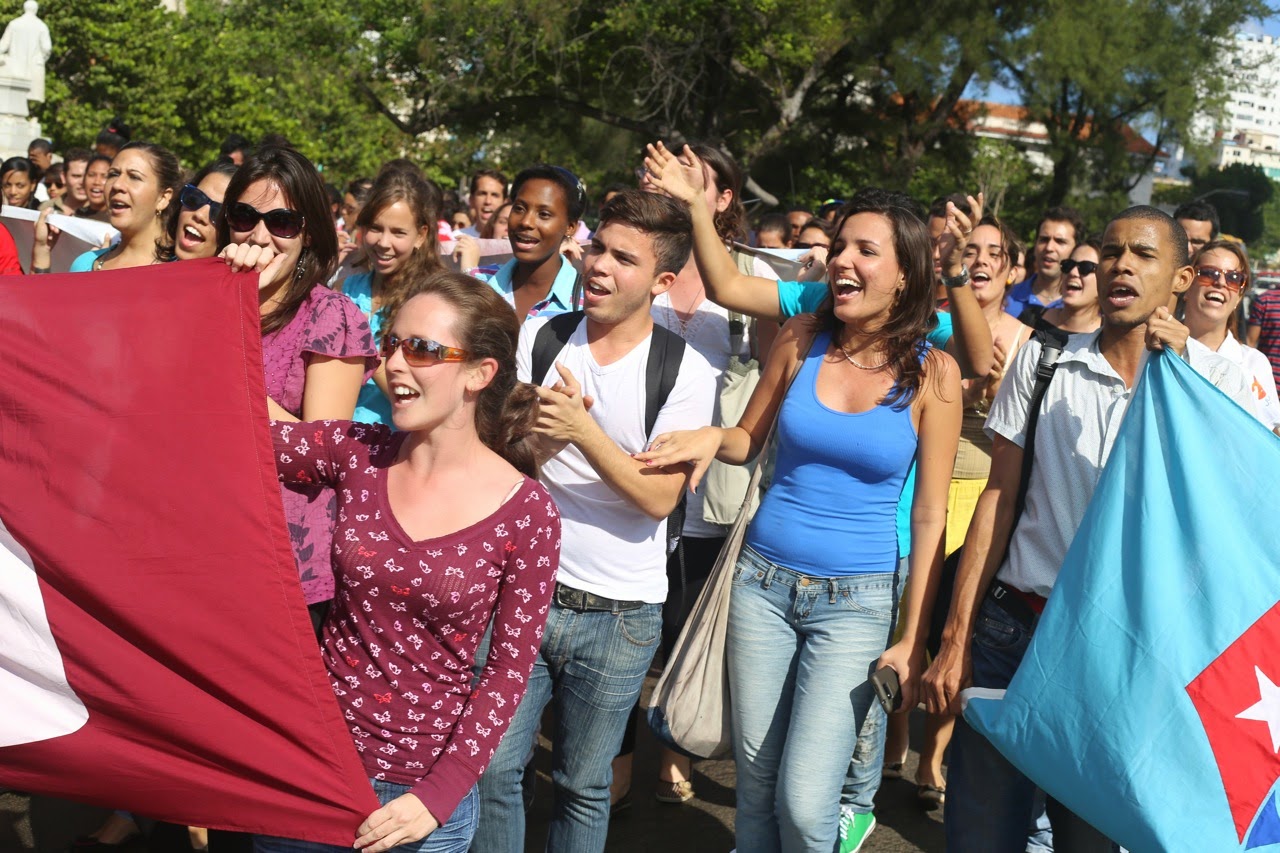 Cuban officials had pushed relentlessly for the release of the “Cuban Five” as they were known. The government staged mass marches and protests reminiscent of a campaign demanding the return of Elian Gonzalez, a six-year-old Cuban boat wreck survivor who when in the US was thrust into the centre of an international custody dispute in 1999.

“Elian Gonzalez and the Cuban Five is all I’ve heard about for almost my entire life,” said Alejandro Cespedes, 25, who sat with a friend in the lobby of the Hotel Capri in the capital Havana. “I was nine-years-old when the government started campaigning for the Cuban Five.”

Some Cubans grumbled about the long-running campaign to free the five spies, but news of their release and the prospect of normal relations with the US was all people were talking about Wednesday.

“We were all sure the Cuban Five would return one day, but we didn’t know when,” said Juana Garcia, 65, who stood outside her home in Havana.

Another woman, Rosa Karla Garcia, 41, said: “Now I hope relations with the United States will improve. I hope our two peoples become one, because it’s the people who suffer when governments fight.”

“How many years has it been? Fifty-some years – way too long,” said neighbour Haydee Cuellar, 48, who runs a so-called casa particular, a home offering rooms to tourists.

“This is the biggest news the Cuban people will get this year,” said Gonzalez Iglesias, 64, a chef who works at a restaurant nearby. “This is an end-of-the-year gift.” 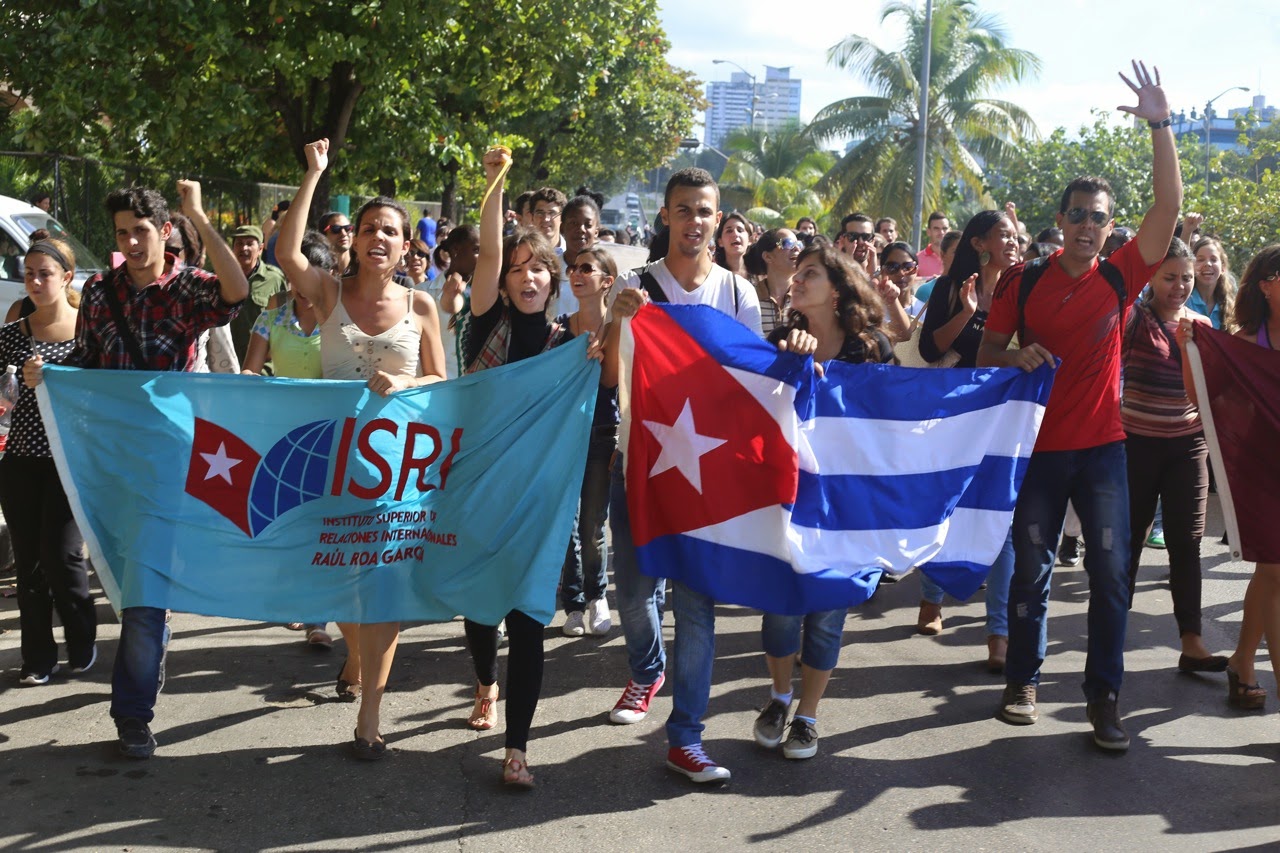 Several co-workers nodded as Iglesias continued. “We’re not bad people,” he said. “We have nothing against the Americans. But we don’t agree with their government’s politics. I mean in 50 years, what has the embargo accomplished? All it does is hurt the Cuban people. It grinds them down. But our principles haven’t changed.”

Iglesias said he welcomes increased tourism from the US, along with measures to allow Americans to use credit cards and ATM machines on the island.

“With those and other changes, the blockade practically disappears,” he said. “Now more Americans will be able to drink Cuban rum and smoke Cuban cigars.”

Students from the Raul Roa Garcia Institute of International Relations in Havana paraded through the streets in celebration after hearing that the US and Cuba were moving to restore diplomatic ties.

“No one ordered anyone to go into the streets,” said Yusnely Hernandez, 33, a waitress. “They went on their own.”

Residents cheered as the students romped through Havana’s Vedado neighbourhood. Some residents waved from open windows. Others peered down from apartment balconies.

Their final stop was the Institute of International Relations, where dozens of American academics, analysts and anti-embargo activists had been meeting with their Cuban counterparts to debate the prospects of improved US-Cuba relations during the final two years of the Obama administration.

Participants at the conference cheered when President Raul Castro announced the three spies were heading to Cuba.

“For Cubans, it’s the beginning of the end of the war,” said Philip Brenner, an American University professor who attended the conference. “They’ve felt under siege for 55 years. Now there’s a sigh of relief. They can now imagine normal relations, something they didn’t think was possible.”

“These are truly historic days,” said Sarah Stephens, director of the non-profit Center for Democracy in the Americas in Washington, DC.

“This is the right thing to do,” said Stephens, who also attended the conference. “We can feel proud of our governments. It obviously takes a lot of courage on both sides or this would have happened a long time ago.”

Stephens said she believes that lawmakers will eventually dismantle the Helms-Burton Act, which bans most trade with Cuba.

“I think there will be a lot of enthusiasm for that in Congress,” she said. “There’s a majority that wants the policy changed, but haven’t felt they had the political space. They were waiting for leadership from the president. I think the voices of those who have been the loudest in supporting US policy will now be drowned out.”

Still, she said, “It’s going to be a huge battle.”

The US and Cuban governments will also continue to clash, she said. “There are still going to be many, many points of disagreement between our governments. It’s not happy-ever after. It is hopeful and it’s forward-looking – and it’s the greatest news.”

Mike Kopetski, a former congressman from Oregon state, said he supports the move to restore relations with Cuba.

“Credit goes to both Raul Castro and Barack Obama because it takes two leaders agreeing to agree for this to happen,” said Kopetski, who was also at the conference. “It’s a gutsy move by President Obama. President Obama won the Nobel Peace Prize – this becomes part of that legacy.”

Kopetski joined Cuban students who marched in the streets, celebrating Wednesday’s announcement. He said the US and Cuba should try to learn from each other.

“We need to learn from their system, as we did in China, as well as they need to understand our system and let’s go on from there. It’s a new beginning.”

Deysi Mata Nuñez, the Cuban woman who sells dolls, said Obama’s announcement is a vindication of the Cuban revolution.

“The revolution didn’t take anything away from us. It gave to us.”

She conceded that life hasn’t been easy during these past decades. She’s seen her share of sadness and heartbreak, but she said she’s not bitter. “Life is too short for that.”

And she’s convinced the next generation will be better off than hers. “I’m sure of it,” she said. “I have faith.”