Rogue tech guru John McAfee is campaigning for the Libertarian Party’s presidential nomination, and his headquarters earlier this summer was a yacht at the Marina Hemingway, west of Havana.

“I chose Cuba because the American government has manufactured totally ridiculous crimes against me in order to shut me up,” he declared.

To legions of supporters, including more than one million Twitter followers, McAfee is an anti-government crusader who isn’t afraid to speak the truth. 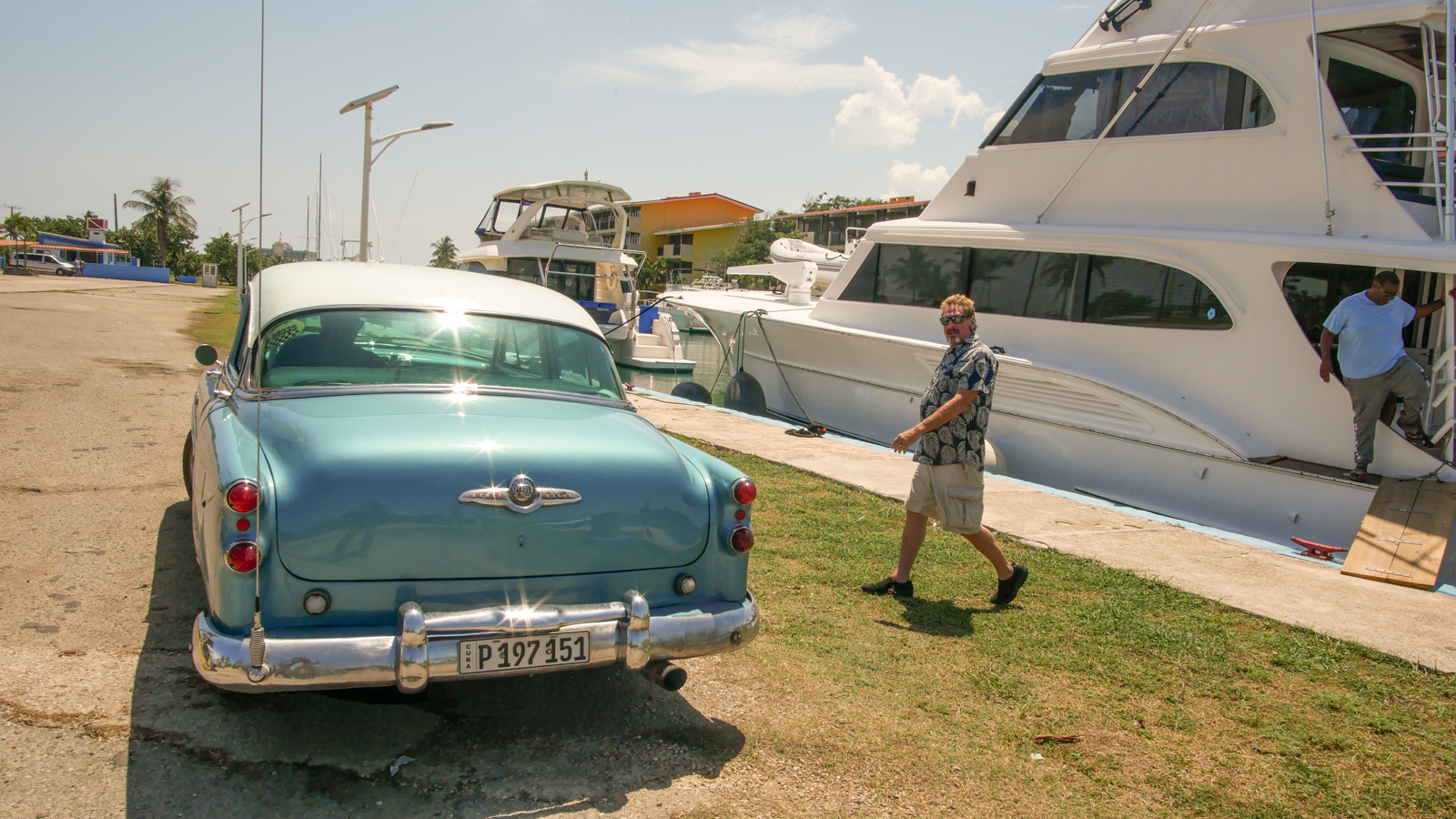 To critics, he’s a nefarious character with a troubling past that includes accusations of murder and torture.

McAfee, his wife, Janice, and their crew arrived from Puerto Rico on June 17. In an interview in Havana, he said Cubans were friendly and “surprisingly generous.”

“I’ve never seen a happier bunch of people in my entire life,” said McAfee, founder of the computer software company named after him. “I hope I can stay here throughout my campaign until November of 2020.” 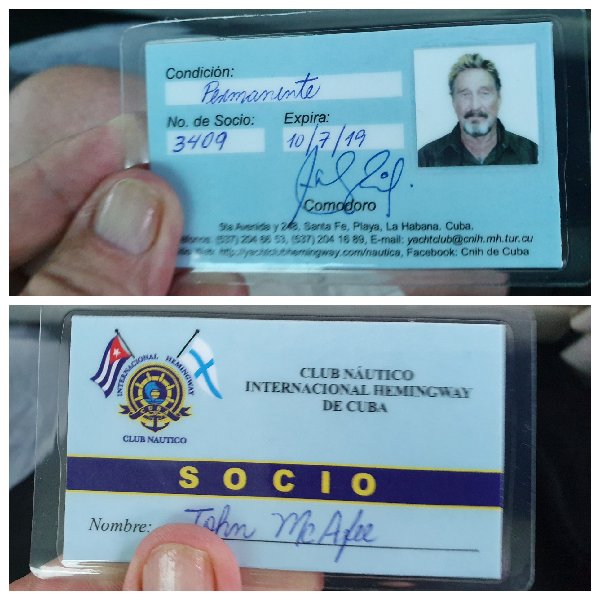 But just 32 days after arriving, the McAfee clan suddenly departed, traveling more than 800 miles to the Dominican Republic, where they were detained.

Dominican authorities freed them on July 24. “Glad to be out of ‘detention,’ ” Janice McAfee tweeted.

The McAfees left behind weapons, cash and precious metals that Dominican authorities found aboard their yacht, Great Mystery.

Also a mystery is why John McAfee left Cuba. His explanation was that the CIA had tried to “collect” him, and he fled.

Some Cuba watchers believe Cuban authorities may have weighed the pros and cons of their presence and asked them to leave. A Cuban official declined to comment.

After leaving Cuba on July 19, McAfee posted a photo of himself and his wife posing with weapons. “We are at sea now and will report more soon,” he said. 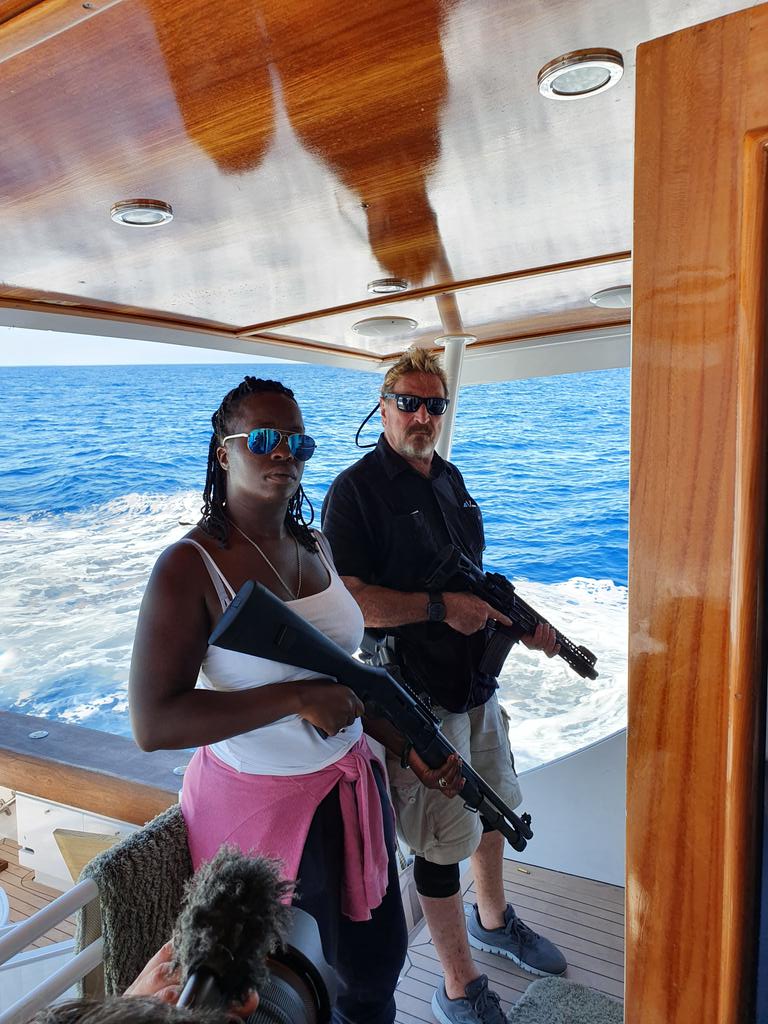 Dominican authorities said they seized the weapons after McAfee entered the country “in an irregular way.” They said the U.S. had no extradition order for McAfee, so they deported him to Great Britain, where he was born.

McAfee, a U.S. citizen, had raved about Cuba. He took in a show at the famed Tropicana cabaret and went to Finca Vigía (Lookout Ranch), once home to writer Ernest Hemingway.

“I have always admired Hemingway’s fearlessness, his willingness to stand up to injustice,” McAfee tweeted.

“To be quite frank, I think Cuban people look a little bit overfed,” said McAfee, chuckling. “I took photographs of food stands all around the country overflowing with melons and squash. That does not look like a starving country to me. The people seem free.”

McAfee apparently did not notice surveillance cameras installed on some Havana streets.

“In America, we have cameras on every street corner watching our move. Here, which America says is a police state, I haven’t seen a single f——g camera. And, please don’t say, ‘you’re not seeing it.’ Bull—t. I’m a cybersecurity expert.”

“I’ve been followed, but I’m always followed. I don’t know whether it’s Cuban authorities or the CIA or someone else.” 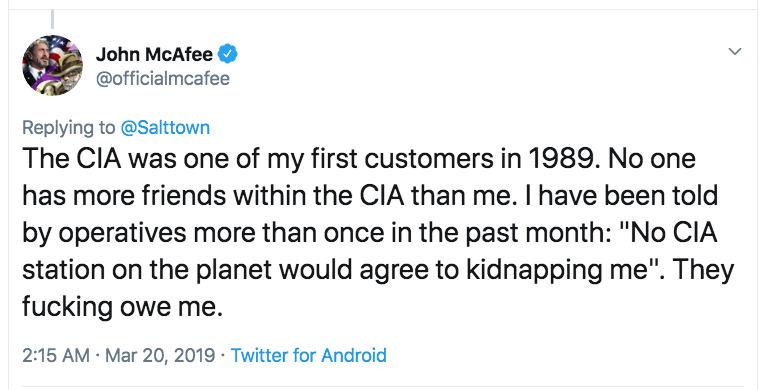 He said he expects to be indicted on criminal charges in the U.S. but is guilty only of tax evasion. McAfee’s made-for-Twitter campaign attracts new followers every day, but some people object to his escapades.

“He’s a publicity hound. It doesn’t matter whether it’s good or bad publicity. He just loves publicity,” lawyer David B. King testified in a wrongful death lawsuit against McAfee. The suit alleges that McAfee ordered the torture and murder of American Greg Faull in Belize in 2012. Back then, Faull and McAfee were neighbors on the lush, 25-mile-long island of Ambergris Caye.

McAfee had armed security guards walking on the beachfront at night, neighbor Jeff Spiegel testified. “John also had numerous dogs that would bark incessantly all night… The atmosphere was difficult and extremely tense. The dogs would jump the fence and at times attack people. One of John’s dogs bit me.”

On Nov. 8, 2012, Faull poisoned some of McAfee’s dogs. The next day, the lawsuit says, a McAfee security boss transferred $5,000 into a local man’s bank account.

On Nov. 10, that man crept into Faull’s home, tortured him with “either a Taser or a cattle prod,” then shot him in the head.

“John McAfee wanted him to suffer before he died, and he did,” said King, the lawyer.

King said McAfee “hid from the police,” fled to Guatemala and later returned to the U.S.

No one has been charged in the case.

McAfee declined to talk about criminal accusations against him.

“This is my 203rd lawsuit,” McAfee tweeted. “I never answer them. I own nothing, and no one has ever collected.”

Undeterred, the Faull family pressed for damages. On March 20, the judge ruled the family was entitled to $25 million, plus $8,482.43 in funeral expenses.

The family’s lawyers dispute McAfee’s claim that he owns nothing.

McAfee resigned from his software company in 1994 and sold his remaining stake in the firm in 1997. Intel later purchased the company for $7.68 billion. McAfee now champions cryptocurrencies.

In April 2018, the Independent, a British newspaper, reported that McAfee charges companies $105,000 for every tweet he posts about their cryptocurrencies.

McAfee has bragged about his riches, including his yacht. Dominican authorities have not said whether they are keeping the boat.

Four dogs – Marley, Duchess, Axel and Tequila – were left on board when McAfee was detained.

“If the Dominican Republic harms a single hair on any of my dogs…wrath will rain down from heaven,” McAfee warned on Twitter.

His followers immediately drew comparisons to John Wick, the Keanu Reeves character who goes on a rampage after his Beagle puppy, Daisy, is killed. “John WickAfee,” one follower quipped.

Janice McAfee later said the four dogs were “safe-ish” after being moved to someone’s farm in the Dominican Republic.

On July 30, McAfee told his Twitter followers he’s in Lithuania.

McAfee won 14 percent of the delegate vote for the Libertarian Party’s presidential nomination in 2016.

The party will choose its 2020 nominee in May. McAfee isn’t expected to win but said it doesn’t matter.

All he really wants, he said, is to warn Americans about the purported evils of the U.S. government.

“Politicians are talking about immigration, the Middle East. Stop looking outside for our problems. Our problems are internal. We have elected these monsters and we have allowed them to tell us what to do with our lives. We need to see the truth. We are lied to. We are walking blind. Do you see the insanity?”