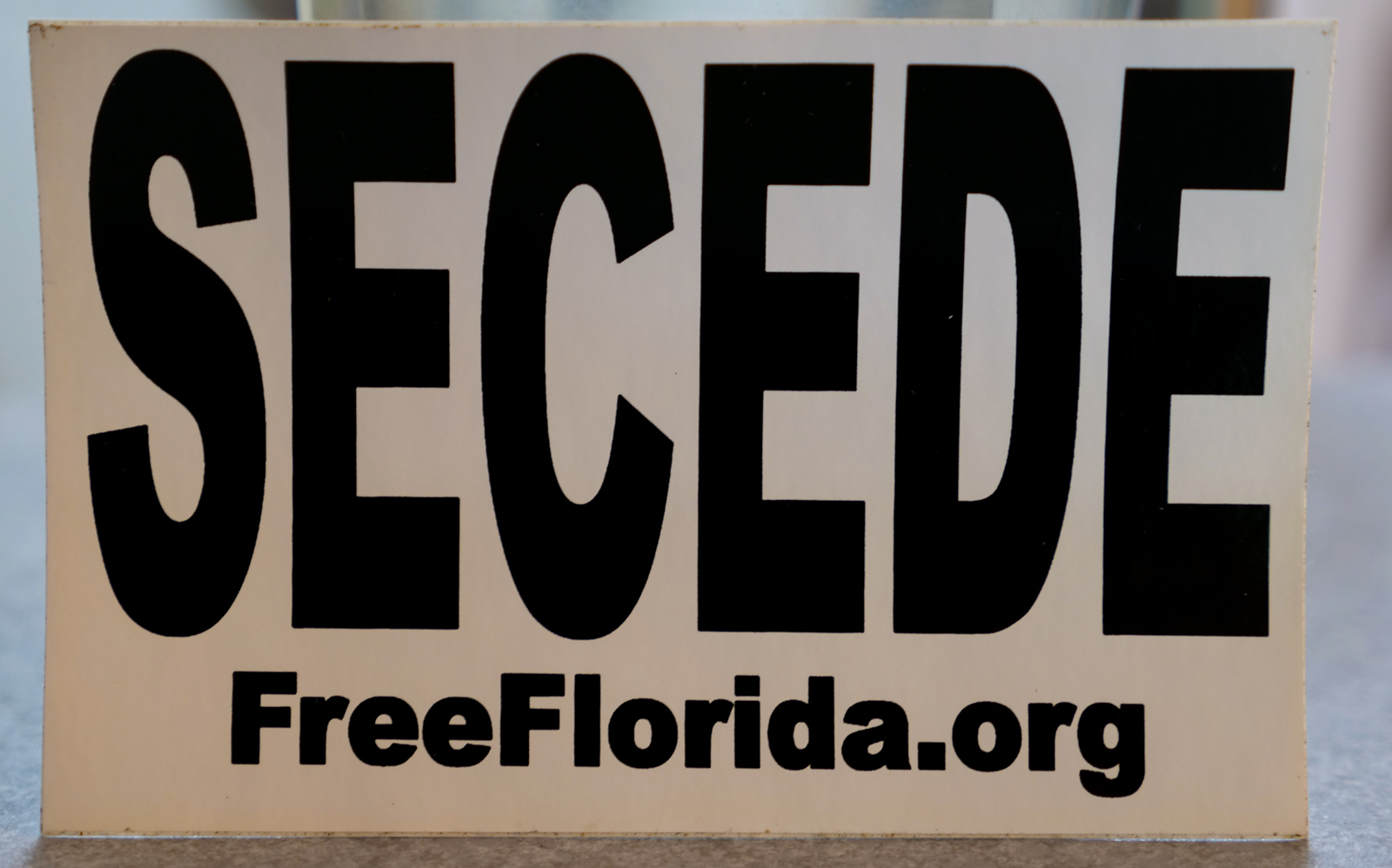 White Southerners are a stateless people who should secede from the United States to prevent the “extinction” of their beliefs and way of life, Southern nationalist leaders said.
“We have been subjugated by the United States,” said Michael Hill, co-founder and president of the League of the South. “The South’s enemies don’t care about the truth. They care about one thing and one thing alone: Power. The opposite of love is not hate. The opposite of love is power. They want to use their power to destroy us.”
I attended the league’s annual Florida conference in Lake City, Florida, as part of a documentary project I am making about protest in America. Hill told me has taken part in hundreds of protests over the years. He is a defendant in a civil lawsuit filed after the deadly Charlottesville “Unite the Right” rally in 2017 (See “Pro-white nationalist: “Multicultural melting pot … a disaster”).
The Aug. 7 conference was entitled “Countering Communism in the South.” Hill spoke of a “global quest to institute communism.”
“America no longer exists even how it existed 50 years ago,” he said. By the 1970s, “it was already under the spell of the global left.”
A Godless empire that is intent on “poisoning the world with its ideology,” Hill said. “The South is ruled by an alien class of people.”
“There are a lot of people out there who know that somethings’s wrong. There’s 1,000 voices giving 1,000 opinions. The main question is this: Should the South stay or should we go? We in the League of the South believe we should have gone a long time ago.”
Hill said the left has been targeting Southerners.
“We have been the low-hanging fruit that the left has gone after,” he said. “What we’re seeing today is the world turned upside-down. That’s what revolutions do. The satanic principle of inversion has turned the truth on its head.”
The left sees “our flags, our monuments, our stories, our history as threatening, divisive, offensive,” he said.
He said it’s time for people to realize “just how close to extinction we are.”
“We have become spoiled. We have become soft. Unless we do something right now, today, not tomorrow, we may be on the verge of extinction. Do not count on anything coming out of Washington, D.C., to save you,” he said.
Hill said he has asked himself why God hasn’t intervened, but doesn’t have an answer. “God could stop this with a snap of his big finger.”
“May God indeed save the South.”
Michael Tubbs also spoke at the conference. He is state chairman of the Florida League of the South.
“The League of the South is working for the secession of Southern red states,” he said. “Secession is becoming a household word. It’s become mainstream.”
Tubbs cited a July 14 poll showing two-thirds of Republicans in the South favor secession. 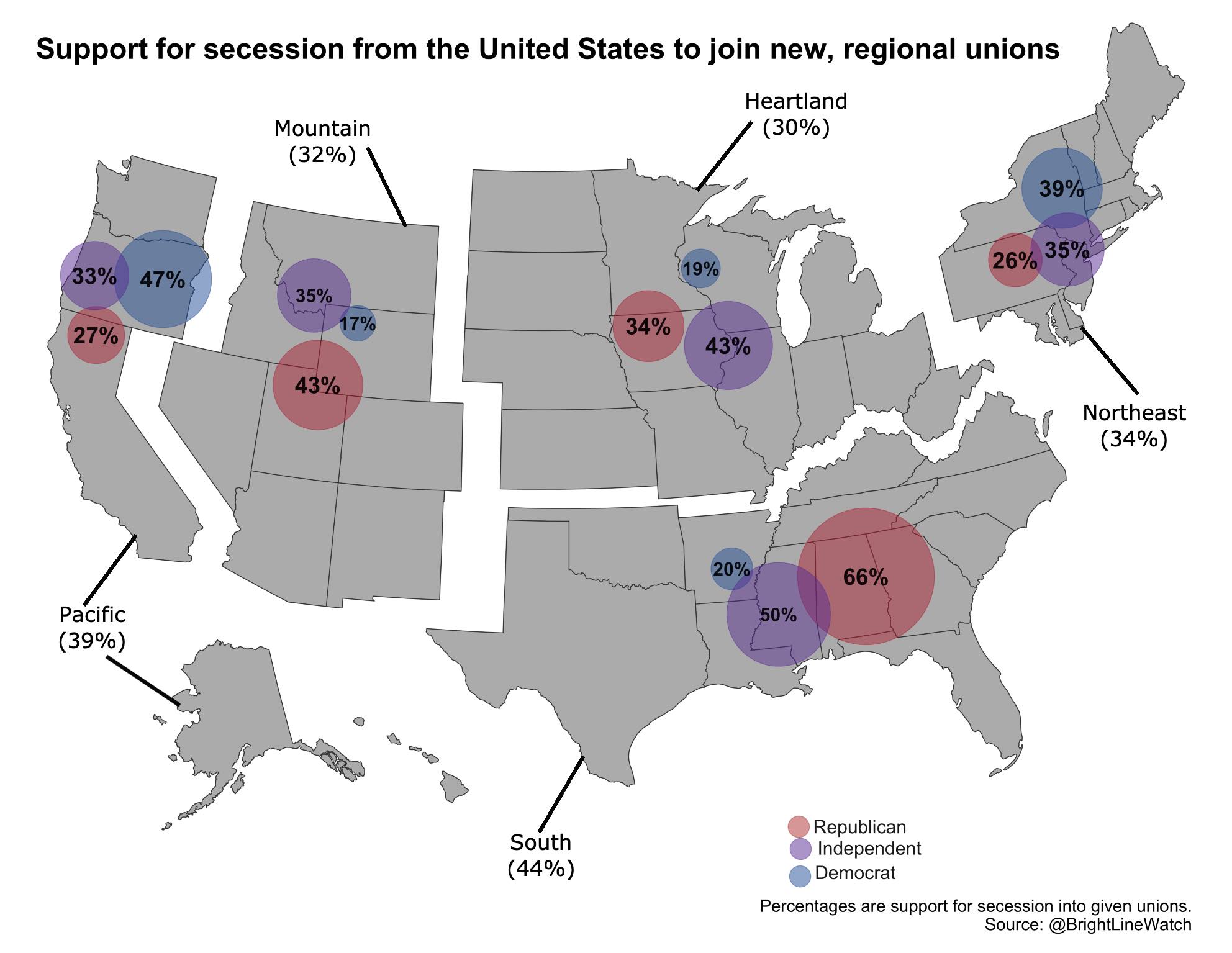 Despite some Republicans’ desire to secede, Tubbs said it’s not easy to put the idea into practice.
“Our work’s cut out for us,” he said.
Tubbs said communism has hurt their cause. He said the Black power movement in the 1960s was communist in nature, but was called a civil rights movement “to give it cover.”
He recalled that Black militant Robert F. Williams fled to socialist Cuba in the 1960s to operate Radio Free Dixie, which supported racial equality.
Nowadays, Tubbs contends, Black Lives Matter and Antifa are conducting “cultural genocide” against the South.
“They are not going to quit until we are dead in our graves,” he said. “We still live with incremental communist revolution.”
Another speaker, John Weaver, founder of Freedom Ministries, said the doctrine of secession taught in the Bible.
“Secession isn’t revolution, but withdrawal” toward “life, liberty and happiness,” he said. “Secession is a peaceful way to separate.”
Weaver spoke out against the U.S. government, which limits political lobbying by churches.
“Abortion is public policy,” he said. “Sodomy is public policy. Socialism is public policy. Marxism is public policy.”
“It’s time to secede. It is time to do so on every imaginable level. The more we obey God, the more liberty we have.” 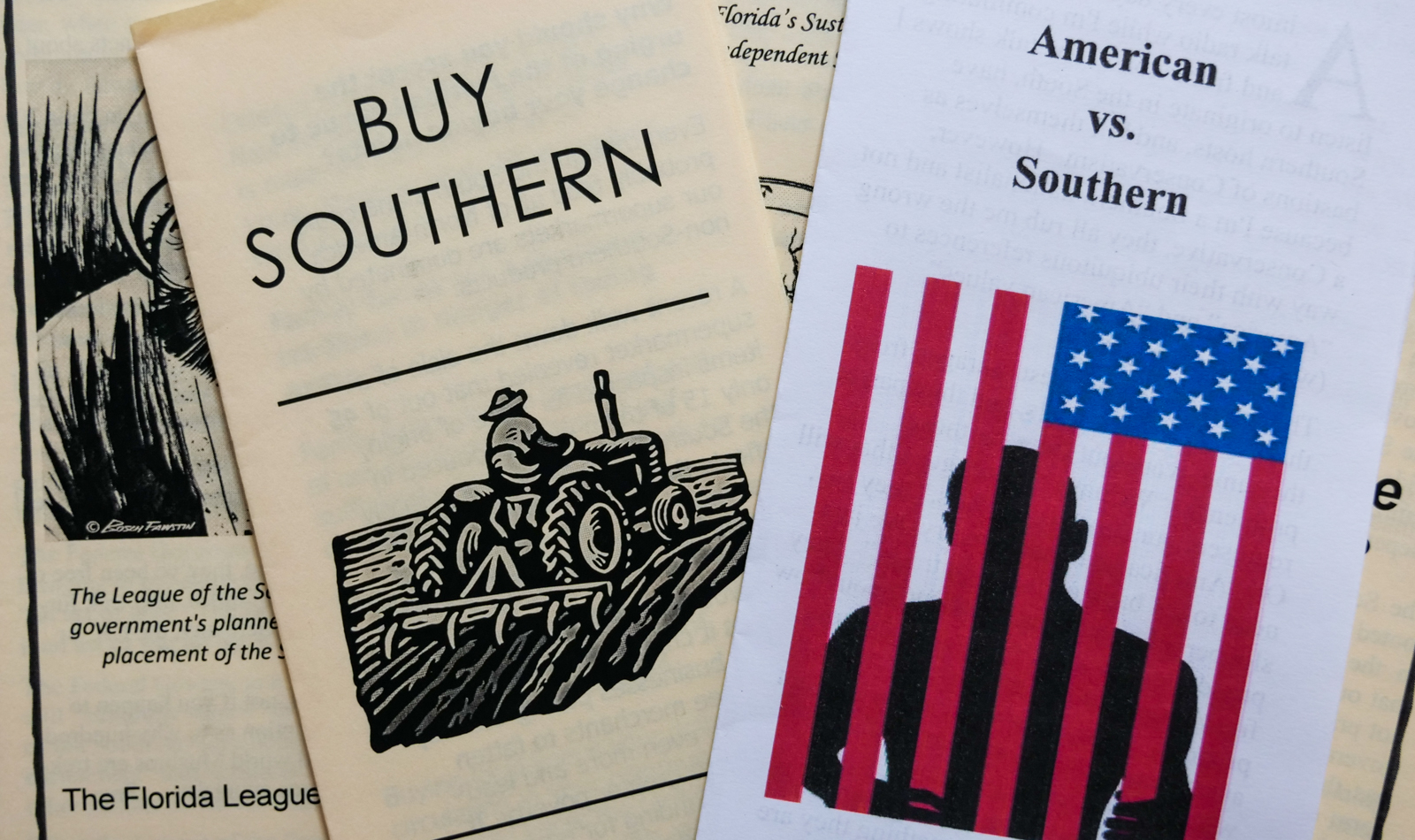 Marshall Clayton Rawson, a citrus grower in Bradford County, said their enemies are trying to “water down” and destroy their identities as Southerners.
“Southerners are ridiculed, scorned and defamed at every turn,” he said.
He encouraged listeners to embrace the “organic identity God has ordained for you” and not a “guilt-induced coveting of another people’s identity.”
“Yes, is it OK to be white and of Caucasian origin,” he said. “Yes, Southerners are a distinct people, a nation.”
Earlier this summer, Rawson was appointed chair of the Republic Liberty Caucus of Greater Melrose, representing Putnam, Bradford and South Clay counties. He said his organization “has come under attack for me being here.” But he said he showed up anyway because “I believe this message is too important and the future of our children, our nation and this great state is worth it.”
Rawson, who is not a member of the league, described nationalism as the antidote to communism, which seeks “global domination.”

Correction: In the Aug. 9 version of this post, I quoted Marshall Rawson as saying whites were “the only people who have fought against communism.” Rawson contacted me on Aug. 10 to say that I misquoted him. Accuracy is important to me, of course, and so I deleted the quote. He told me, “Not only did I not say this, but the quote materially alters anything that I did state in my speech. I wouldn’t have stated anything unless I knew it to be true and could back it up with citations. This statement is not my words nor is it a factual statement to my knowledge.”

In his Aug. 7 remarks, Rawson criticized such conservatives as Nikki Haley, former governor of South Carolina; commentator Glenn Beck; and the Bush family, including George W. Bush.
“On deeper, more important subjects, they take the left’s old narrative and rebrand it as their own,” he said.
Rawson blamed the federal government for the “U.S.-orchestrated invasion of the southern border.”
He urged listeners to be unafraid, to “work to defund government schools” and “delegitimize the media.”
He encouraged people to “quit using the word racism” because that “only feeds into the left’s narrative.”
Rawson said Southerners’ enemies “can’t begin to love unless they first love God. They claim to be anti-racist, but seek to destroy the family. They want you dead.”
But, “through diligence and faith, we shall self-govern again.”
Also speaking at the conference was Mark Thomey, executive officer of the League of the South. He described the United States was not a true nation, but a “political alliance” akin to the European Union.
“Stop believing lies,” he said. “The United States of America is nothing more than the federal government. We should not consider ourselves as Americans ever again, but Southerners. We are a blood and soil nation as Southerners. We deserve out own place where we rule ourselves. We have to have our own place, our own country, ruled by us based on our own beliefs.” 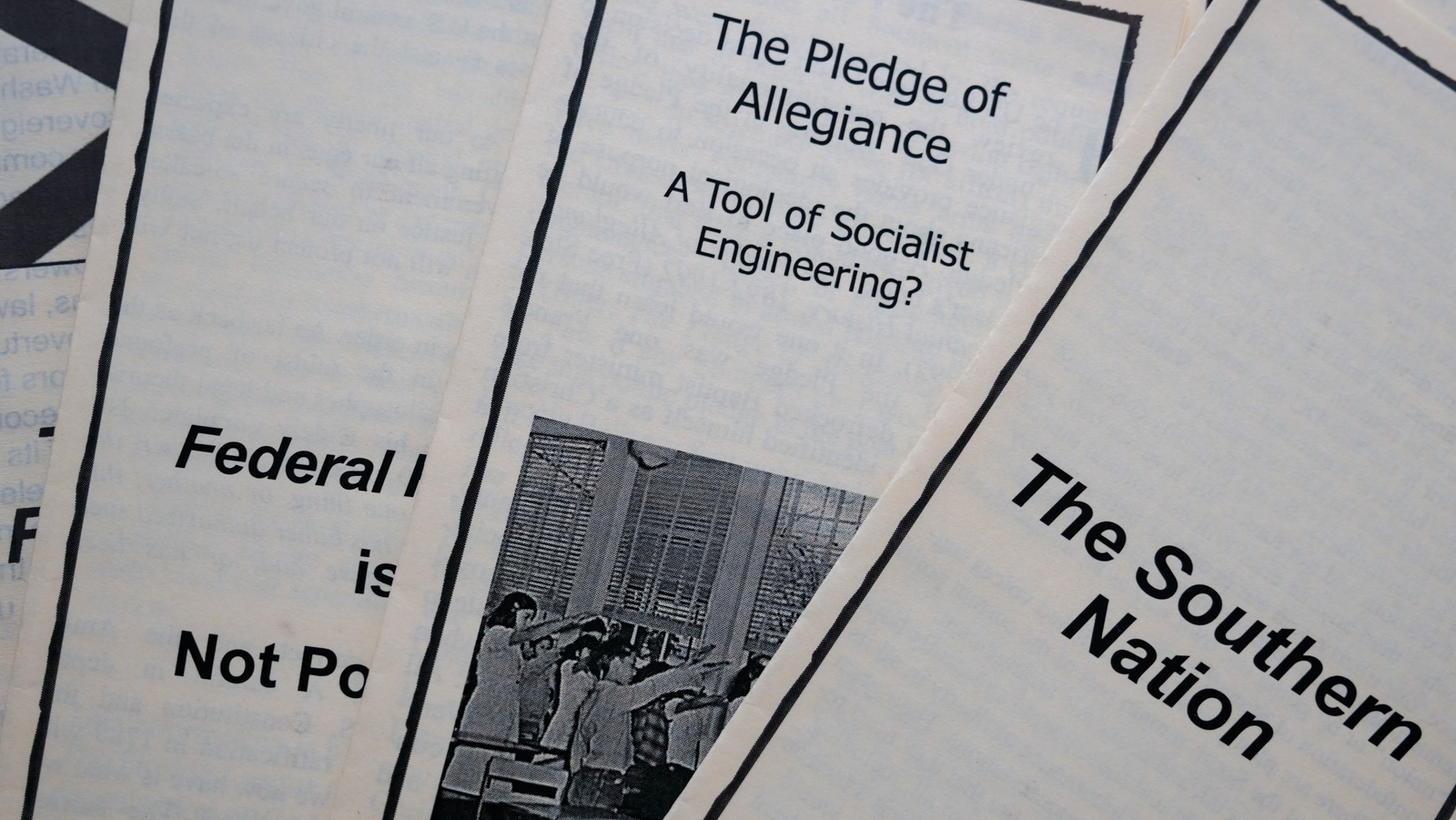 He said Southerners should stop serving in the U.S. military and fighting wars in foreign lands. Some things are worth fighting for, but “that crap ain’t it,” he said. “Our Southern boys have got to stop joining the imperial military service. We should teach them that the only nation they should be willing to fight and die for is the Southern nation.”
He said he has little faith in federal elections, describing the 2020 election of Joe Biden as a “selection,” not an election.
“They can put anyone they want in there and nobody can do anything about it,” he said.
He said he prefers to write-in his own candidates, including Andrew Jackson, Robert E. Lee and John C. Calhoun. These dead Southerners, he said, are better than any of the live politicians going up for office.
“There’s nobody out there who speaks for our values and principles, who speaks for us. What has the Republican Party ever done for us except stab us in the back? Did they get rid of income tax? Did they get rid of the Federal Reserve? Did they get rid of public schools?”
He criticized former President Ronald Reagan for signing a law to create Martin Luther King Jr. Day.
“The Republicans don’t want to get rid of the welfare state. They just want to manage it a little differently. None of the institutions belong to us anymore.”
Thomey also criticized the judicial system.
“You’re not going to get justice in their courts,” he said, and if that’s the case, “play the damn outlaw. Don’t get sucked into their system.”
“They want you dead. They don’t want to see you anymore.
“We are the last bastion of western Christendom on the face of the earth. We are the embodiment of everything they despise. It’s why we have to fight back.”

2 thoughts on “Southern nationalists: “Yes, is it OK to be white””